I have seen a gunshy hunting dog eat the eyeballs of another,
separating him from the pack, pouncing at a side angle.
Justice came minutes later, as a small black bear dismembered
the same dog with a swipe of his paw, just as retribution
eventually came for the bear, gut shot by a drunken Pennyslvanian.
So much of how we live boils down to the way one day
was different from all the others, nothing mystical
or occultist about it. This is probably why so many great
philosophers failed to write anything down except
for a list of their human crimes dotted with all our vices.
Like the time I watched the end of a friend’s marriage,
the quotidian disappointment of tight budgets, the inclination
to flirt or drink, one or the other’s sordid past too much
to bear for either of them. Since I am speaking
in misunderstood parables, I have seen a woman
who understood how to be naked in all its meanings,
standing before me unshy, unshamed, as if the mere act
meant she offered something sacramental in nature,
and even if you are tired of the metaphors of unwrapped gifts
and love as a basic sacrament, I hope you have known
the blessings of the body and its constituent parts,
a promontory of scapula, hipbone hillocks, the subdued dales
of stomach, all of which said to me, this is my body,
as if I was supposed to find meaning there in the litany
of its pieces. Explain to me, puritan, why confession
is out of vogue in a nation built on shame and denial.
Now at the dawn of this post-confessional era,
I pay $9.99 a month direct-billed, just to believe
in exactly these kinds of falsehoods. Shouldn’t we admit
all our sins, even the imagined ones we didn’t commit?
That’s what I believe. Some ecstasies are best left imagined.
Then and only then can I admit what she really said
was, this is my body, meaning this is my body which is broken
for you, and that for all the useless beauty I have
now seen, rapturous and undeserved, afterwards nothing
changed for me, wrong-hearted as ever. I will spare us all
the forced metaphors of passion misplaced, except to admit
under oath how in order to believe, I would do it again,
just to end up exactly where I started. They say employers
value men of a certain experience. One of our great philosophers,
Hendrix, demanded answers to the rhetorical question,
have you ever been experienced? So I wrote this, if it may please
the court, as my answer. As a child, I touched a hot stove
in order to believe, and later, I burned my fingers
with the cigarette lighter from my grandfather’s Chrysler.
I have confessed how I often pray to be led into temptation.
I said, Have you ever been experienced? Well, I have.

It Is All Falling Indelibly Into the Past

My first blue car, the opened noise gate
of its quadrophonic announcements

and in the back seat, stolen champagne
which led directly to stolen kisses

and a borrowed life, which, once I’d opened
its gift, I wanted to return. So many

objects to envy, so many abject lessons,
petite kindnesses like when the cop,

end of shift drained and tired, waved us home.
Soon my newfound program of meditation

will fall away into forgotten habit,
taking its place alongside Lincoln logs,

the backbreak of day labor, the ritual
applications of eyeliner, steel toe boot

and bottled-in-bond whiskey. All of that
is the past, and I keep reminding myself

history is a list of lovers or fractures,
and most of mine are now healed. Most.

I like to say retrospection is the greatest
gift, that memory drives me to stand on top

of the hollowed out mountain of my past,
which has been strip-mined of all its meaning

by this poem and so many others, but sometimes
progress means admitting that we are driven

to repeat our great failures. My grandparents,
dirt farmers and bootleggers, mined the earth

for the black gold of anthracite coal; they dug
the same meager life from the hills of Ukraine

as they did near Hazleton. At my first Christmas,
they gave me a hymn to sing at funerals, Eternal

Memory, as if they knew I would be stuck looking
backwards forever, learning to read the past

as if it was a treasure map, its enormous X
a bold hieroglyph that begged me, Dig here.

Steve Kistulentz is the author of Panorama, named a most anticipated novel of
2018 by the Chicago Review of Books, and a must read selected by publications
as diverse as Entertainment Weekly and the New York Post. He is also the
author of two collections of poetry, Little Black Daydream (2012), an editor’s choice
selection in the University of Akron Press Series in Poetry, and The Luckless Age
(2010), selected from over 700 manuscripts as the winner of the Benjamin
Saltman Award. He teaches at Saint Leo University in Florida, where he serves
as director of the graduate creative writing program. 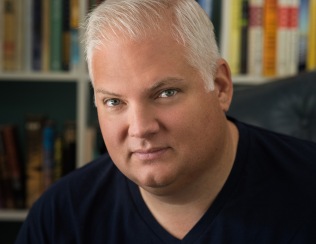