I drive to a fish farm where a man in Lederhosen escorts me through a hall of fish tanks. Afterward he brings me to a small pond and hands me a quarter for pellets from a gumball machine. Looking into the pond is like falling through a mirror in a funhouse. As instructed, I throw a pellet in, then casually pocket the rest. At home I underhand one into the sink and step back and let the dishes thrash around a while.

How to Become a Clown

—after the title of a children’s book

To begin: a clown simply is. He must
learn to mime the sorrow of trees, study
the big top of desire, expect no friend
but his own shadow. A clown paints both eyes
into bright buttons of pain, moistens his lips
with lost legal battles and whiskey bottles,
wears his Orange Julius hair long because
he misses his manic monkey tail. A clown
hums “America the Beautiful,” sings the body
General Electric. A clown asks, You just happy
to see me or is that a sixteen-wheeler I feel in
your pants? To clown is to come one step closer
to Christ: salvation is where one finds it.
Another philosophical question: does one peel
or unpeel a banana? A clown talks national security,
our American empire of ghosts. He thinks
I can do this in my sleep. A clown must learn
to smoke cigars in a bathtub, hobnob with lions
and mice. Play duets with wind-up novelty teeth.
Remember: a clown is the mortician of the soul.
To applause, a clown opines on a talk show,
You can’t change who you are, but you can change
who you become. A clown prays, Let no one
show me the door, I know the way.

If art is the two sons of the famous lithographer
who stole one of their father’s Disasters of War prints and found a buyer in
Dubuque, Iowa,
while he was away on holiday, whose first names were Leonardo
and, no shit, Michelangelo (before the mutant turtles of the same names),
one of whom, the fatter, hid behind the green shades of prescription glasses,
while the other theatrically goosed his too-stupid-to-believe girlfriend,
who walked with their guts puffed out like butchers proud of the smears on
their aprons,
who asked for toothpicks after dinner, as if they couldn’t just suck their yellow
teeth to unwedge
the pasta we sloshed on their plates and sold, all you can eat,
who sat for hours nursing 40 cent, bottomless cups of coffee and laughing,
Leonardo and Michelangelo, with their factory fresh Audis and reputed huge
cocks—
if art is this
little wonder I’m still pissed many years later
I never tossed the dregs of their coffee back in their smiling faces,
never shadowed them out to the parking lot to plop, dime by dime, their lousy
tips
onto the hand-made and brilliantly buffed Italian loafers your genius
afforded them.

A small thing, yes, I admit,
but so is waking your teenage daughter
so she makes first bell, that’s a small thing, too,
but if you blow it, she misses the bus,
doesn’t deliver her oral report on Bastille Day,
which admittedly she didn’t want to anyway,
and because she never says another word
to you or her teacher, finishes with a D+,
which in turn leads her to give up French
and sign up for American Sign Language,
not a bad thing in and of itself,
don’t get me wrong, and may one day
have unexpected positive outcomes,
but until said day will leave you to wonder
when she starts signing at you
in lieu of talking, a less-than-positive
immediate outcome, because your mind
slipped once more and you forgot
another small thing, reserving her prom dress
or not using a gender-neutral pronoun,
if she hadn’t overslept and missed her class
you wouldn’t be in Marseille, say, at a café,
with someone new and exciting, marveling
at the painterly light. 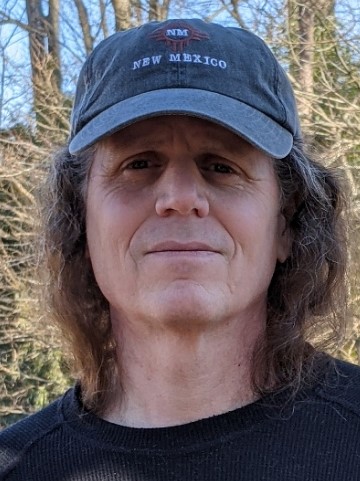 Kurt Olsson has published two collections of poetry, the most recent being Burning Down Disneyland (Gunpowder Press), selected by Thomas Lux as the winner of the Barry Spacks Poetry Prize. His first collection, What Kills What Kills Us (Silverfish Review Press), was awarded the Towson University Prize for Literature for a book published by a Maryland author. Kurt’s poetry has recently appeared or is forthcoming in SLANT, North Dakota Quarterly, descant, Paterson Literary Review, Cincinnati Review, and Poet Lore.

Alexander Chubar holds a BFA from Hunter College and a MFA from the Pratt Institute. His work has previously been published in Gone Lawn journal, Gemini magazine, Subprimal Poetry Art, The Tishman Review, The Storm Cellar magazine, and several other publications.