For me, social distancing is easy. I’m divorced, my kids are grown and my few friends and family members are scattered across the country. But there is other life here with me. On the balcony of my little condo, a bird has made a nest in the broken light fixture and there are two pinto bean sprouts growing here too. I’m sprouting more pinto beans now which I intend to plant. I usually kill plants. I don’t mean to but I don’t water them enough or I water them too much. I’m trying so hard with these. Who knows if I’ll need them to sustain me some day?

My youngest daughter, Carly is coming to visit today. She’s home from college early this year. While she and her friends were down for Spring Break, partying in Key West, she got an email from the college saying to come get her stuff. Classes would be held online for the rest of the year.

She usually stays with her dad when she comes home. He has a bigger house, an extra car she can drive, and an anything goes attitude. She’s also got a dog there and she is crazy about that dog. My place is small, and I still worry about her and try to guide her. I’m not allowed to have pets in my building.

I tell her she doesn’t have to come hang out with me, that maybe I’ve been exposed to the virus and don’t know it yet. I’m a teacher and have been out of school a week now so I think I probably wasn’t exposed to it there, I have no symptoms, but my second job at the front desk of a luxury condo downtown is a concern. One of the residents tested positive for the virus and is hospitalized. The spouse is self-isolating. I worked a shift there just a few days ago but quit yesterday when I found out. Who knows how many other residents are carriers? That place is teeming with world travelers.

She wants to come see me. She says she’s sure I’m fine. I don’t tell her maybe she’s been exposed too, in the Keys, out at restaurants and bars the week prior with her friends. She knows. Florida waited way too long to shut it all down. They still haven’t closed all the beaches and bars and restaurants. When she arrives I hug her at the door, carefully keeping my face turned to the side, just in case.

I start in about the pandemic and how badly our “leadership” is bungling it but she gives me a pleading look. She doesn’t want to talk about it. She is young and wants to be happy. I am always bringing up the most depressing news and talking to her about Bernie Sanders. She doesn’t want to think about those things but I want my kids to have a future.

My kitchen is uncharacteristically well-stocked in preparation for the time we’ll be told we can’t go out at all so I can offer her many options for dinner. She says yes to the chicken parmesan and I find I actually enjoy cooking again. Since, normally, I work two jobs and only have myself to feed I mostly eat tuna or eggs, salads or frozen dinners, but there’s no rush now and I love feeding “my last baby” as I call her sometimes.  I always prepared home-cooked meals when she was growing up. Even for breakfast. Even on school days. Once when she was in second grade the teacher was asking the students what they’d had for breakfast and was astounded by my daughter’s answer. “You ate all that this morning before school?”

I don’t think the teacher quite believed her but it was true. We called it “the whole nine yards” and it consisted of eggs, usually scrambled with cheese, hash browns, grits or tater tots, bacon or sausage or both, pancakes or French toast or cinnamon toast and orange juice. Every single day! I believed that thing about breakfast being the most important meal of the day and never ever sent my kids to school hungry although they were a bit late sometimes.  And they’ve never had a weight problem. Ever.

When the chicken parmesan is ready I serve it on my best blue ceramic plates and we sit down to eat at the small high top table in my tiny living room in front of the TV.  We settled on “Broadchurch” and I was relieved to see my daughter’s reaction when the mother was running frantically through a traffic jam trying to get to the place where the police are investigating a boy’s death, knowing that most likely it is her son.

Carly sets her fork down, puts her hand on her heart.

After dinner, she wants to show me a magic trick. It involves 21 cards and is easy to do. She ends up doing it three times. The first time she has to do it over because instead of putting the card I select back into the pile of cards, I hide it behind me on the sofa. The second time I forgot what the card was. Was it a six of hearts or an eight of hearts?  The third time she managed to do the trick with my full cooperation and it worked. Afterward, she showed me how to do it although neither of us understood exactly how it worked. It just did.

I’m planning to perform the trick for my students when I teach them online next week. I really want to cheer them up. We had another active assailant drill the week before the break and one of my kindergarten students was crying.

“You know it’s just a drill, don’t you?” I asked him, rubbing his back. He nodded, still crying.

So on Monday, when we meet online, I’ll show them the card trick and after amazing and distracting them for a few minutes, I’ll show them how it’s done. Then they can make it work. Even if they don’t understand it.

Postscript, April 25: When I wrote this, Florida had 763 known cases of the virus and twelve deaths. On April 1, when Florida had 6,741 cases and eighty-five deaths, Republican Governor Ron DeSantis announced a safer-at-home order, which caused much confusion. It shut down most businesses. Places remaining open were deemed essential, such as houses of worship, golf courses, gun stores, and the arena where WWE is filmed. On April 9, Florida was up to 6,826 known COVID-19 cases and 371 deaths, yet the governor suggested reopening schools, saying the virus didn’t seem to be a big problem for kids. After an onslaught of protests from teachers and parents, it was decided to continue online learning for the rest of the school year. Now, the governor is in discussions about opening up the state, even though Florida has over 30,000 known COVID-19 cases, over 1,000 deaths (including someone I knew). Only a very small percentage of Floridians has been tested for the virus. 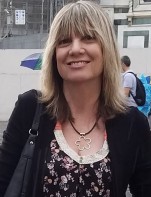 Kimberly Diaz studied creative writing at Eckerd College in St. Petersburg, Florida. Her work has appeared or is forthcoming in Montana Mouthful, Eckerd Review, Fleas on the Dog, Dead Mule School of Southern Literature, Sunspot Literary Journal and some anthologies. She is currently working on a collection of creative nonfiction and so glad she got to finally visit Italy last summer.