“They rationed during the war,” I say. She leans closer, meows so loud my ears ring.

The gray cat stares at her empty bowl. “I’m sorry, Whiskers. We don’t know how long this thing will last.”

Whiskers narrows her green eyes, then bites my finger. “Go ahead,” I say. “Eat all you want. I’ve got nine other ones.”

The ringing stops. She digs in.

Her mother continued to hand her things: that lost dollar, a Chinese cookie fortune, one missing pearl earring. Sarah found this both comforting and odd, especially since her mother had died six months earlier.

When Sarah missed her mother most, in that dark hour between midnight and sleep, she rested her hand on the cold sheet. That’s when an itchy twinge woke her, and the small gifts appeared along the lines of her empty palm. 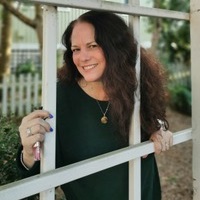 Maureen Sherbondy’s poems have appeared in Calyx, European Judaism, The Oakland Review, Prelude, and other journals. Her poetry books include Dancing with Dali, Eulogy for an Imperfect Man, Beyond Fairy Tales, The Art of Departure, and six chapbooks. Lines in Opposition will be published by Unsolicited Press in 2022. She has also published a short story collection, The Slow Vanishing. Lucky Brilliant, her first novel, was published in September. Sherbondy, who teaches at Alamance Community College, lives in Durham, North Carolina, with her husband Barry Peters.