The woman seated next to me on the plane says she’s on her way to visit her son who lives in a group home. Her son is forty years old but with the mind of a two-year-old.

Like a kiosk worker peddling perfume in the mall, she offers up this information about her son without my asking. We’re flying over the Grand Canyon, which looks like a scab from up here. My husband Wade is in the aisle seat across from us, watching a movie on his tablet. My six-year-old son, Henry, is in the aisle seat next to me, watching a movie on his tablet. I don’t have a tablet. I have a book opened on my lap, my finger holding the sentence to which I hope to return.

My seat neighbor tells me her son’s two roommates have minds equivalent to a seven-year-old and a twelve-year-old.

I think of how my son—six in mind and body, to the best of my knowledge—can never keep straight how a cat’s age compares to human age. Of our eighteen-year-old cat who is so bony that petting him is awkward, nerve-racking, in fact, like stroking the tangle of cords spiraling out from behind a hard drive, one day my son says, “So if he were human, he’d be three?” Another day he says, “So in cat years I’d be ninety?”

My seat neighbor takes her son and his two roommates out to dinner at Golden Corral every time she visits.

She says, “I always go over the rules with them beforehand. I say, ‘What are the rules?’ And they say, ‘One: Don’t eat so much we puke. Two: Eat our greens before we have dessert.’”

The first time she took them to Golden Corral, all three of the men (children?) ate so much they puked.

“I try to visit every four months,” the woman says. “But sometimes I do surprise visits. You have to, you know.” She doesn’t say anymore on this subject.

I nod. Who hasn’t heard stories about neglect in places like that?

Then she tells me all three men/children have girlfriends. Because her son doesn’t speak, his and his girlfriend’s relationship consists of sitting next to each other and smiling. “They’re adorable,” she says.

I want to ask about her son’s girlfriend’s mind age and body age, but I’m afraid the answers might disturb me.

No matter the woman’s son’s girlfriend’s mind age, if her body has been alive fewer than say thirty years, then this woman’s son has no business sitting next to her and smiling, I think. But maybe I’m wrong, like I was wrong about how cats age compared to humans. Turns out that whole cats-age-seven-human-years-for-every-calendar-year thing is bogus. In general, cats age fast, then a little less fast, then less fast still. If you’re into numbers, the average cat supposedly ages about five human years in a calendar year after reaching adulthood.

But “human years” is hardly a standard unit of measurement.

In his book Ageless Body, Timeless Mind, Deepak Chopra makes the point that people’s bodies age differently. When I told Wade this, he said, “And for this he has a book?” But I don’t think Chopra’s point is as common knowledge as Wade suggests. At my gym, they calculate everyone’s heart rate maximums using the same one-size-fits-all formula everyone everywhere uses. When the instructor tells us to run as fast as we can on those treadmills, to “empty our tanks,” my heart rate monitor will report that my heart is beating at 102, once as high as 105, percent of my maximum heart rate, which is obviously untrue or else I’d be dead.

Then there’s my sister Rita, four years my junior, who is always mistook by strangers, and even our Great Aunt Pammy, as the eldest. She’s a stress junkie is why. That and she dumps Doritos and mixed nuts onto a plate and calls it dinner. The way she drags her feet, she looks as though she expects, and maybe wants, to die any day now.

Our older cat reminds me of Rita. Because he no longer grooms himself, his fur has become matted and clumpy. I snip away these clumps from time to time, leaving behind nearly-bald patches. Sometimes the clumps loosen all on their own. We find them on the floor, the sofa, in the litter box. His fur babies, we call them. Rothko’s claws don’t grow right anymore, either. They’re thick and dull, no fine points.

One evening a few weeks back he squatted in our bathroom while we were brushing our teeth before bed. Squatted like he was going to poop right there on the tile by the shower. He did that for maybe ten seconds, then stood, took a few steps, and squatted again. Nothing to show for his efforts. But the next morning we found three hard balls of poop scattered about our living room like the younger cat’s toys. Rothko slept all day. Didn’t even get up when I jiggled the treat bag. I checked him periodically to make sure he was still breathing.

Every time we leave town now I worry the cat sitter will arrive to find Rothko dead. I don’t mean I think it would be such a terrible thing for him to die. His senses are so gone, he’s always getting beneath my feet. Everyday it’s an effort not to step on him. What I think in these close calls is what if I were geriatric, too? I’d either end up killing him by stepping on him or killing myself in my effort to avoid stepping on him. Living with a very old cat means constantly contemplating your own mortality, your own impending frailty. I mean I worry because it would be awkward for the cat sitter. Would she wrap him a plastic bag? Then what?

My son wants little to do with Rothko anymore. His refusal to brush that cat makes me think of Eskimos, how they supposedly used to send their elderly adrift to die on ice floats. I read that in actuality, senilicide was rare, a thing that happened only during times of famine. And when it did happen, it wasn’t nearly so picturesque. They just stopped feeding their elderly. Or they locked them out of the house in the cold.

My son used to cuddle that cat. He doesn’t remember, though. Three years is half his life ago. When we boarded the plane an hour ago, he said he loved the cinnamon-flavored pastry tart I fed him for breakfast the day before and could he have one again sometime soon, and I corrected him. “That was this morning,” I said.

His time confusion extends to me. Last year when I was forty-five, he asked me no fewer than a hundred times how old I was. “How old are you again? I forgot.” Sometimes when I answered him, he’d say, “What?! I thought you were fifty-five” or “I thought you were sixty-five.”

Another point Deepak Chopra makes in that book is the body is mostly water, and there is no such thing as old water. But when I answered my son’s question with “I’m as old as water,” his eyes grew wide. He said that because water cycles, it’s all super old.

I have a friend who is often saying, “Growing old is hell.” Between my cat and her mother’s dementia, our conversations almost always circle back to aging and death. Also, her partner had a stroke a couple years back, at the age of forty-six. He’s fine, fully recovered, but the shock of it is not something any of us has recovered from. He’s just about the healthiest man I know. Goes to the gym every day, drinks kale smoothies for breakfast.

And now there’s Wade’s sister’s eleven-year-old daughter, Savannah. Cystic fibrosis. “Complications,” my sister-in-law said on the phone. That’s why we’re flying to Chicago, I tell my seat neighbor when she asks: for my niece’s funeral.

In a photograph taken on her eleventh birthday, Savannah looks to the ceiling over her hospital bed. It’s pocked with plastic, glow-in-the-dark stars.

In my son’s Montessori school, they celebrate birthdays with a ritual that makes me shiver every time I watch my son do it. The birthday child is presented with an inflatable globe the size of a soccer ball. The child carries Earth around the sun, represented by a lit candle. Triangular, yellow rays fan out from the candle’s base, each triangle printed with the name of a calendar month. The child begins with his feet next to the month he was born. A chorus of children’s voices count off the revolutions each time the child reaches that month again. I shiver I think because every year I realize I’ve lost track somehow of the tangible fact that age is measured by the movement of the planet.

It’s not a wonder I forget this, what with the way we use age as a measuring unit for so much else, as though age were a direct measure of our abilities and accomplishments. One doesn’t need an extreme example like my seat neighbor’s son to know age is always a faulty measure for such qualities as maturity and intellect and vigor, or examples like my friend’s husband or my niece Savannah to know disease and death can strike the young as well as the old.

Or maybe I shiver because every revolution is like another entry into the death raffle.

Wade said yesterday after his sister called that it’s not the natural order of things for a parent to outlive a child.

The plane buckles through turbulent clouds. I put my hand on my son’s knee, check that his seatbelt is clasped. I think of the arrival of Gambel’s quail chicks, a hallmark of spring in the desert where we live. Early in the season I see parents leading as many as twelve fuzzy, gray chicks through the desert brush. Some weeks later, it’s much more common to see parents leading just one chick, maybe two. 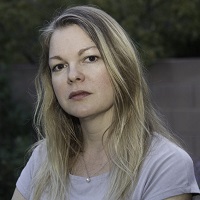 Michelle Ross is the author of There’s So Much They Haven’t Told You (2017), which won the 2016 Moon City Press Short Fiction Award. Her fiction has appeared in Alaska Quarterly Review, Colorado Review, The Pinch, Wigleaf, and other venues. Her work has been selected for Best Microfiction 2020 and The Wigleaf Top 50 2019, among other honors. She is fiction editor of Atticus Review.