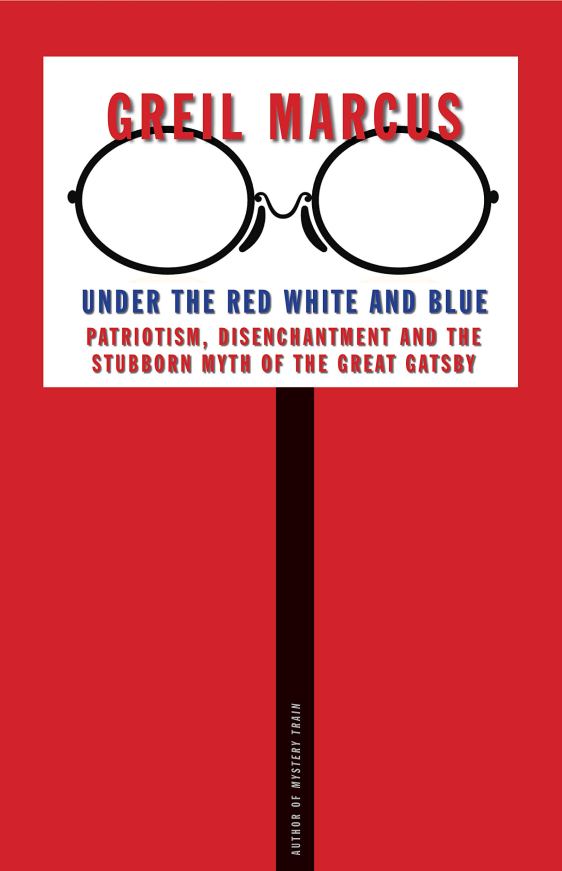 Greil Marcus already had a couple of books under his belt when a newspaper editor assigned him to write what he calls a “premature obituary” of John Wayne. I’ve gotten that same assignment, and it’s not easy to write about two things that are really one, in this case a living person who will soon be dead. I feel Greil Marcus’s pain: once I wrote an obit for a writer who was in awful health who not only didn’t die for another ten years but kept publishing and giving interviews as I desperately updated a life he had no intention of leaving.

But Marcus has made a career out of juggling contradictions. The back cover of his book on the Doors poses the question, “The Doors: a lasting voice or psychedelic trash? To Greil Marcus they can be both—in the same song.” Perhaps that’s why he is drawn to art, to songs and books and movies where something can be said in a way that is itself and also its opposite.

Born in 1945, Marcus came of age in the fifties and sixties, the golden age of action-packed Western movies in theaters and “splatter platters” on the radio. The movies featured white actors in polyester braids playing Native Americans, and the splatter platters (also known as “death discs”) were teen car-crash ballads like “Last Kiss” and “Tell Laura I Love Her” that were both silly and sob-inducing.

As critic, he had me at Mystery Train: Images of America in Rock ‘N’ Roll Music, where he gives Elvis the same cultural weight as Herman Melville and says almost defiantly that he is uninterested in synthesis because he’d rather dramatize “unities in the American imagination that already exist.” He had me at The Old, Weird America: The World of Bob Dylan’s Basement Tapes, which traces the music of Dylan and The Band back to a nineteenth-century Whitmanscape of mountebanks and riverboat gamblers and runaway slaves. And he had me again at Lipstick Traces: A Secret History of the 20th Century, a book I re-read every few years because I have no idea what he’s saying although I love how he says it. (In this I’m reminded of the reaction of Washington Post critic Mark Kernis to the songs on Elvis Costello’s “My Aim Is True,” his breakout 1977 album: “I can hum them all, but I don’t understand any of them.”)

More recently, Marcus had me yet again at The Shape of Things to Come: Prophecy and the American Voice, which begins with a look at a typically bizarre factoid of the type that drives Marcus wild with a kind of grim joy. Lincoln delivered his Second Inaugural Address on March 4, 1865. In the seats above the president sat John Wilkes Booth, no doubt wondering if he should make his move then or wait till both men are in the Ford Theater a month later. The war was almost over, and though the day began with heavy rain and gale-force winds, the sun came out as the president spoke. Spectators tilted their hats so the light wouldn’t blind them, yet in that moment of cohesion and renewal, writes Marcus, “there was a man walking alone at night through a forest as bats flew through the trees.”

I loved The Shape of Things to Come so much that I taught it in a sophomore honors seminar. The students hated it.

I think one problem my young readers had is that Marcus moves so quickly—the dash is his favorite punctuation mark—slapping the hammer of his six-gun like Wyatt Earp and roaring through stop signs like The Leader of the Pack on his Triumph 200.

And then, maddeningly, he can slow to a snail’s pace. In Under the Red White and Blue, he devotes six pages of his short book to an attempt by Andy Kaufman (the comedian who said that comedy doesn’t have to be funny) to read all of The Great Gatsby on Saturday Night Live in 1978 before he is stopped by audience groans and the intervention of producer Lorne Michaels. And then there’s a ten-page tribute to the almost forgotten Gilbert Seldes, a Jazz Age writer and critic who, despite (or because of) his obscurity is one of Marcus’s Elvii, an eclectic group which includes Dylan, Melville, Springsteen, Edmund Wilson, and, of course, the original Elvis himself.

To Marcus, The Great Gatsby is an “inevitable, fated account of what it means to be an American, and to live up to the charge in the American charter.” And what is that charge? It is both to invent yourself and to pay the price for your self-invention. So Donald Trump is “a-Gatsby-for-our-time,” as George Will said, but so is Barack Obama—“What do we really know about this man?” asked John McCain when he ran against Obama in 2008.

Jay Gatsby’s one-size-fits-all story “feels as though it were always there,” Marcus writes. When you meet Gatsby, you meet yourself. He is our collective national fantasy, which is why the book seems familiar. Gatsby tries and fails, but is there any other way to go about life? Gatsby is the president of the United States, but he’s also the redneck who says, “Hold my beer.” Marcus never comes right out and says so, but to be Gatsby is to be a patriot, to be someone on the move, pursuing happiness. The nationalist is mired in his monotheism, in his narrow hatred of everything that is not himself, a loathing so all-consuming that amounts to a civic religion. But the patriot is in motion, which may explain why Marcus’s prose tears along at a breakneck pace and then collapses in exhaustion. The patriot is you, reader, and he is me.

If Gatsby is each of us, there’s a problem with depicting him concretely, which is why the different movie versions of the book fail except for the Baz Luhrmann 2013 film. Four earlier versions were made, but none come up to snuff, and Marcus takes special pains to savage the 1974 model. “Old records play,” he writes, “and you wonder: were they issued with those scratches?” When the characters cavort to these pre-antiquated tunes, “the dancing seems like a hysterical obligation…Every gesture might have a pulley at the other end.” As for the leads, “Mia Farrow’s Daisy seems to be on barbiturates. Robert Redford acts like he’s not completely thawed out.”

But then there’s Baz Luhrmann’s adaptation, which succeeds mainly for two reasons. The first is the slow reveal of Gatsby, who is played by Leonardo DiCaprio. Rather than shoving Alan Ladd (you’ve got to be kidding) from the 1949 movie or Robert Redford in front of the camera, we first hear Gatsby’s voice, then see his hands, then the side of his body, and only then his face.

And when that face arrives, it’s DiCaprio’s, which is the second reason why Luhrmann’s portrayal of Gatsby works when those of the other directors don’t. As opposed to his expressionless predecessors, DiCaprio has a squirmy, easy-to-unsettle look which he brings with him from roles in such earlier movies as The Titanic and The Departed. Marcus’s book was written before the release of Quentin Tarantino’s Once Upon a Time in . . . Hollywood, but here, too, DiCaprio plays a character who seems ready to fall apart at any moment, one whose bravado is offset by a terror so great as to be a certainty that someone is about to burst into laughter and announce that the emperor has no clothes.

Marcus’s description of Luhrmann’s bit-by-bit reveal of Gatsby/DiCaprio recalled to me the way St. Teresa sees Jesus in the course of her ecstatic vision, that is, very, very slowly. Jesus, too, bit off more than he could chew. His night in the Garden of Gethsemane is filled with doubt, self-pity, muted rage. He’s quite vocal on the cross—both Matthew and Mark have him saying, “My God, My God, why have you forsaken me?”—whereas Gatsby dies wordlessly.

Or if he did say anything, it wasn’t recorded, since he is shot by a vengeful George Wilson, who then shoots himself. Which means the last words of the book are uttered by Nick Carraway, who describes how Gatsby, like all of us, ran faster and faster toward an “orgiastic future” that pulls away from us as we chase it until we die.

D. H. Lawrence wrote that the essential American is “hard, isolate, stoic, and a killer.” Gatsby is a little of all these things, but he is especially isolate. He loved Daisy, but she married someone else. Too bad: among other virtues, a smart spouse is there to give you good advice. When I was struggling with the obituary of that writer who clearly had no interest in dying, my wife said, “Just write it in the present tense. When you’re done, you can go back and change the verbs.”

Some fixes are easy, some not. Now that I’m done with Under the Red White and Blue, I’m going to go back and read Lipstick Traces again. Meanwhile, I think I’ll teach Under the Red White and Blue in my honors seminar next spring. It should go over better than my first attempt at teaching him did, because my students will have read The Great Gatsby in other classes. Well, that and the fact that they are Gatsby.

David Kirby’s collection, The House on Boulevard St.: New and Selected Poems. was a finalist for the National Book Award in 2007. Kirby is the author of Little Richard: The Birth of Rock ‘n’ Roll, which the Times Literary Supplement of London called “a hymn of praise to the emancipatory power of nonsense.” His latest poetry collection is More Than This. He teaches English at Florida State University.