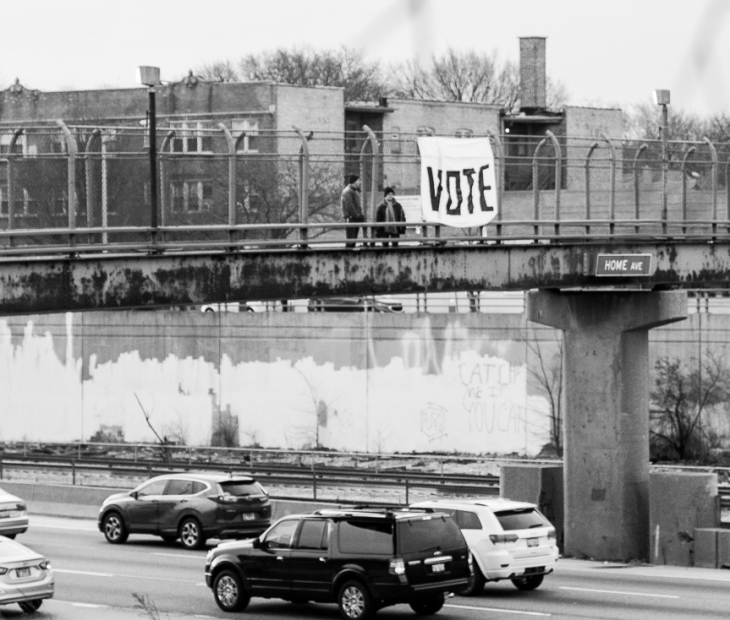 Do we all have secrets now?  A friend of mine is unspeakably happy, because she’s fallen in love during the pandemic.  She’d been widowed over thirteen years ago (not a term I’ve ever heard her use but what is the term when you’re queer and grieving?), C. died of breast cancer, and now R. is bleary-eyed with sex and wonder.  She and N., her new love, hold hands at the table.  They are building raised garden beds. They wear bandanas that make them look jaunty and their faces are alive with pleasure.  R. is an activist, and before the primary she, N., and others hung a banner over the Eisenhower Expressway urging people to VOTE.  And my secret, in this time of vigilance and side-eye surveillance?  I resist the rules.  I wear a mask, but only sometimes.  No when I’m running and walking, yes when I’m shopping.  I feel confused and defiant.  I don’t always want to be trying to evade death.  I’m haphazard about wiping down surfaces with alcohol.  Today I opened the FedEx box without doing so, while last night I wiped down the kitchen table, the counter tops, the light switches, the refrigerator handle, and the cabinet knobs.  There’s no logic to any of this.  Perhaps my biggest secret is that I have a doppelgänger.  Someone who’s already sick, whom I’ve never met.  He’s a well-known artist, though I’m not familiar with his work.  I’m not sure why I’ve latched on to him.  Every day I check his CaringBridge page to see how he’s doing.  Some days I check multiple times.  (No new news this morning.)  I won’t go so far to say that I’ve tied his fate to mine—that’s an insult, and diminishes his life and current struggle—but I won’t go so far to say that I haven’t.  We’re both white, both privileged (an assumption about him, a truth about myself); we’re both in high risks groups, but he’s a decade older.  Maybe’s he’s Jewish like I am, he has that craggy male Jewish look, but his last name also suggests he could be Irish.  His wiry wavy hair reminds me of my father’s; people used to say I resembled him.  What all this suggests is that I’m probably full of shit.  He’s off the ventilator now, feisty now, even conniving, and friends write in from all over the globe to express their love and relief, to cheer him on and note his tenacity . . . as if some of us are not tenacious enough.  I’ve read that being on a ventilator for a prolonged time can cause lasting lung damage even as it saves your life, and so I worry about that.  Will his vigor be reduced?  (And what do I know about his vigor?) Will he be able to make new work?  (And the echo, will I?).  I feel like a stalker, but what am I chasing?  Once I clumsily followed Margaret Atwood through an airport, where we were both leaving town after a conference.  I didn’t want anything from her; rather I wanted her to want something from me.  I wanted her to feel pleased by my attentions.  She caught me staring at her, and I ashamedly stopped.  (Once an acquaintance waited in the wings for Meryl Streep, and when the actress appeared, mistakenly blurted, “You are my biggest fan.”).  My doppelgänger doesn’t know I’m stalking him.  He doesn’t know he’s become a fetish.  I haven’t left a message on his CaringBridge page.  If he continues to improve, the tether will slacken, my interest fizzle.  I’ll likely forget about him.  Or will I?  Yesterday, I wore the mask on a walk but pulled it off mid-way because it was smothering and there was a peculiar dank smell inside its not entirely closed system.  Nothing is foolproof.  Everything is porous.  On Sunday I have a Zoom date with R. to meet her new lover. 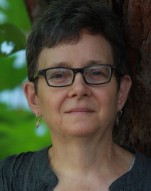 Peggy Shinner is the author of You Feel So Mortal:Essays on the Body, which was a finalist for the PEN/Diamonstein-Spielvogel Award for the Art of the Essay. More of her work can be found here at the Paris Review.