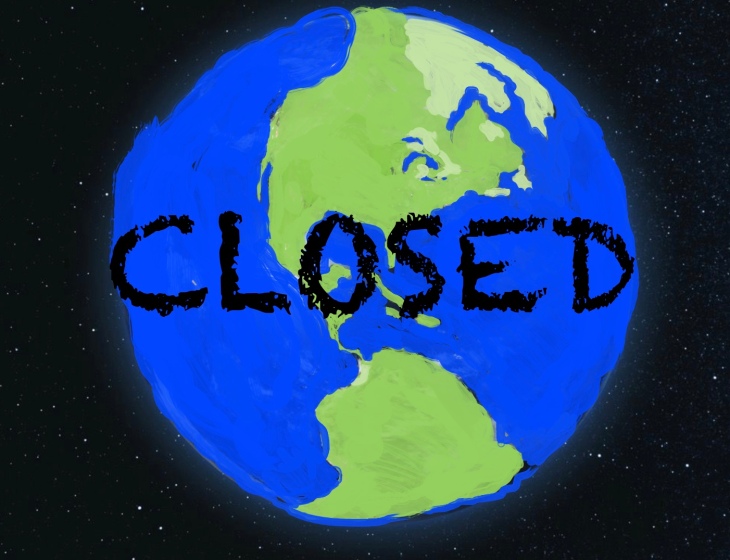 After the news broke that the University of Chicago dorms would be shutting down for the next three months, our Dungeons & Dragons group went out to a farewell dinner, right before the restaurants closed. Looking back it seems absurd but people were still going places then and, people being all one has in crisis, we thought it’d be good to see each other given we’d be scattering like marbles across the country in a matter of days. My boyfriend brought a suitcase with him to the restaurant, thinking he’d store some of the stuff from his room with me. In the extra space in the suitcase we’d put emergency supplies and food we’d buy later that night, food that we could cook together until he flew home for spring quarter. Even though he’d spent almost every night since we met at a Halloween party, this was the most stuff he’d ever left at my place.

Dinner for the four of us was at Eto’o on 53rd. Close to campus, close to my apartment. The place had lots of fantastical sodas in bright colors. Appropriate for a D&D dinner, especially in such strange times. He ordered salty egg yolk spider, a basket of fried crabs covered in egg yolk. Neither of us had ever eaten crab, but we thought that if there were ever a time to try new things it’d be now. The group talked about the next D&D campaign, pirate themed. I could almost taste salt-air, picturing a shadowy room, small candles and blue Christmas lights glinting off dice and mugs of rum, but it was going to be different long distance. He would still DM, already having prepared to run the pirate campaign and the cyberpunk one after that.  I’d still want to play a bard, and our paladin and sorcerer would probably stick with similar roles, but they wouldn’t be able to come over Friday nights, there wouldn’t be pizza like usual, under colored lights and carefully-arranged candles. I wouldn’t bother to light candles none of them would be able to see.

Later, in the cleared-out Target across the street, we all went shopping. We packed the suitcase full of everything we could find, aiming for two weeks of food just in case. Paper towels since there was no toilet paper left, apples, frozen burritos, canned corn, all we needed for lomo saltado except habaneros, stuffing food between the towels he packed for me to store, gray and well-worn in a way that feels like home. The towels I later cried into, hanging person-high on the rack by the bath when I was unexpectedly, overwhelmingly sad, when we fought in the week leading up to his (scheduled, then canceled) flight, when the relative calm I felt obligated to maintain as a hospital employee broke. After his flight was canceled and the  shelter-in-place order he’s always here, and I don’t turn to towels when I worry about everyone in clinic. I can turn to him.

After shopping, we thanked the rest of the D&D group for helping carry what didn’t fit in the suitcase, and the four of us had with a pre-going away/pre-isolation party in my apartment. Since it was only the four of us, it wasn’t breaking the rules at the time. We went for maximum festive lighting: blue Christmas lights over the clothes rack, orange by the bed and rainbow above the bookshelf, the multi-color glow giving an atmosphere of festivity and normalcy. My boyfriend drank a Corona from the box in the fridge. We had bought two twelve packs back in January because it’s his favorite beer. Now it’s a little on the nose. He put on a party playlist and we danced in the warm dim light, like at a bar mitzvah, like tomorrow wasn’t real, like the dorms closing wouldn’t send everyone thousands of miles apart for the next quarter. Or, since the guidelines change daily, an unclear skein of time.

A few days later Karina, our paladin, messaged, “Here” out of the blue, and when I opened the door she handed over twelve rolls of toilet paper before coming in for a cup of tea. Even outside the game, she was coming to the rescue unexpectedly. Neither of us was hoarding-she had bought them for her dorm room a while back, expecting to use them next quarter. She was planning to leave that week. Everyone was still planning to fly home. I was still thinking my boyfriend was leaving, too, since his parents wanted him near, I stashed a big Ziploc bag of tea he gave me behind the bed so I could drink it when I missed him. But then they cancelled all those flights at Midway and his mom agreed it’d be better to stay in Chicago. We had talked about moving in together for the summer before all this.

A few hours after Karina left, my boss singled me out in our Zoom meeting because I looked so upset at the news that someone in clinic had COVID-19. Since my pulmonary research team had been working from home for a while, it was too late to worry about contracting the virus. Nobody on our team was ordered to quarantine but I felt guilty for having thrown that party all the same.

I feel guilty for kissing him, too, for feeling alive, walking home with him on the edge of the world, lights glittering the wet street.

Before the lockdown order, on the way to the store one day, he looked at the puddle lining 55th, saying he wanted to swim, that he wished he’d brought his bathing suit to the apartment instead of leaving it in campus storage. I said we could go to the lake, later. It was sunny but brisk, like a spring day should be as we continued on to the store, missing that moment of forgetting.

He told me that afternoon that since the Shedd is closed to humans they let the penguins walk around free. I asked what if they figure out how to get into the tanks and eat all the fish? He said they can’t, babe but I’m already lost in images of deep blue, diving deeper, gliding towards salt scent, cold flesh, freedom.

Alexandra Weiss is an incoming literature graduate student and clinical research assistant at the University of Chicago. She’s working on designing the database for a COVID drug trial and has been published in Haggard and Halloo and Cadaverine Magazine, among others.