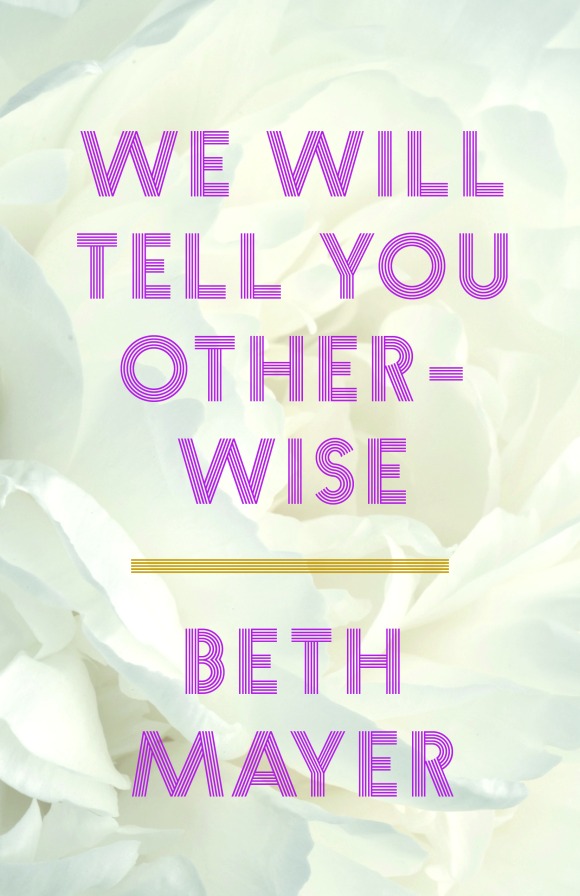 Quite often, short story collections coalesce around a character or a group of characters, a single event or theme, or a common setting: something that explains why these pieces are grouped together. But such a common thread may not always be the best choice. Because there is an overarching connection among the stories in this kind of volume—which, when read singly, would not be apparent—there can also be a sameness to the narratives that, when taken together, diminishes the effect of each piece as well as of the collection as a whole.

Beth Mayer’s We Will Tell You Otherwise appears to fall into this category. Every title includes some form of the word “tell,” and a half-dozen of these stories were previously published separately under different titles, suggesting, perhaps the author changed the names to tighten the bond. Happily, however, this is not the case. Rather than restricting her fictional world, Mayer’s focus on the notion of how stories can be told expands the possibilities, resulting in a book that is varied in narrative voices but uniform in the quality of the telling.

Evidence of Mayer’s skill can be found in the opening stories: “Don’t Tell Your Mother” and “Tell Me Something I Don’t Know,” both related in the first person but distinct in voice and tone and situation. In “Mother,” the narrator is an innocent, curious ten-year-old who is spending the night with his father smelt fishing. This mix of naivete and wonder is introduced in the story’s first two sentences: “There are three things you need to be a smelt fisherman: a net, a bucket, and your thumb. There is only one thing you need to be a cadaver, and that’s to be dead.”

The boy’s father is a doctor and, as he tells us, “I’d been pestering him to let me see a real dead person, but he wasn’t sure that was a good idea.” He also lets us know that it is 1972, that Nixon has just been re-elected president and that “We didn’t know then what would happen with mother’s newest lump.” This last bit of information—the return of his mother’s cancer—is so matter-of-factly dropped into the story that the reader almost forgets it, until the end, when the narrator tells us once again about “the lump in my mother’s breast,” and everything that has happened in the previous pages resonates with a deeper, richer tone.

In the second story, “Tell Me Something I Don’t Know,” cancer again plays a role. This time it is a child who is ill: “My son, Ethan, has a brain tumor. It’s likely to kill him eventually.” Unlike the innocent narrator of “Don’t Tell Your Mother,” the narrator here deals with his situation with sardonic humor that masks his dread and the looming loss. He says early on, “For now, it’s Ethan’s job to have cancer and my wife’s job to take care of Ethan.” His job as the father of a sick child and husband to the mother of a sick child is a mystery to him, and he flounders. For him, life’s lessons seem less instructive than destructive.

Meyer has eight first-person stories here—nine, if you include an epistolary romance—and all of them are distinct in character and voice and intent, though not always evenly so. Many of these “I” stories begin with sentences meant to establish both the voice and the direction the narrative will take us. Sometimes these openings seem implausible, while others work because the story ends up validating the introduction. “Psychic Suzy Tells Me the Future,” for example, begins, “When I was a boy of twelve, in my ardent desire to avoid blaspheming the Holy Spirit, I sought the council of my classmate and unchurched neighbor girl, Psychic Suzy,” which seems a bit heavy with idiosyncratic detail but, as the story unfolds, turns out to be the ideal introduction to the narrator and his tale.

The stories told to us in third person, by contrast, are more easily entered. “Walter Bombardier Tells a Big Fat Lie” starts this way: “At sixty-eight, Walter Bombardier was troubled by any muddling of old and new.” Despite a quibble about the muddling of a sixty-eight-year-old, the reader is presented with a character in a more direct, simple fashion. The same is true of “Some Good News to Tell:” “Margie unlocked the door to the Clothes Depot every Saturday morning at six.”  Instead of trying to win us over with a character’s singularity, these pieces begin with the familiar and move toward the specific.

Probably the best—at least the most delightfully perplexing—story is “Let Her Tell the Way.” This sad odyssey, set in 1978, involves a mother and her three children who set off for Niagara Falls without their husband/father who mapped out the trip but needed to stay behind because “Someone, tragically, had died.” The fact that Frank, the father/husband, is a third-generation funeral director makes his decision logical, but Mayer slips in “tragically,” a word that somehow seems false coming from a man whose livelihood relies on people dying. In his world, is any death more tragic than another?

Disappointed repeatedly by her husband’s “planning vacations that never happened,” Peggy and the children set off for Niagara Falls without him. The journey is fraught with typical road trip trappings—bored and contentious kids in the car, bad restaurant food—but Mayer makes things even worse when Frank’s 12-page itinerary is rendered illegible and they learn that Love Canal near Niagara Falls, where they are to stay, has been declared a toxic waste site.

What makes this story particularly intriguing are the footnotes. When we learn that Peggy makes “pink money” selling Mary Kay cosmetics, a footnote explains what Mary Kay is and what it stands for: “God first, family second, career third.” Another deals with AAA, and another offers the definition of a yurt. When the family stops at Howard Johnson’s for a meal, the accompanying footnote reads “Otherwise known as Hojo’s.” Only one of these footnotes includes anything other than objective information in a parenthetical aside: “Flint, Michigan (It used to be really something).”

So who is the author of these footnotes? Who is providing us with information we need to understand the story, the time? The narration is third person, so it’s not likely Peggy. Is it Frank? An outside observer? It’s a nifty little puzzler that makes the story even better than it might have been without the citations.

We Will Tell You Otherwise is, as the story above shows, a smart collection. The writing is sharp—witty when it needs to be, poignant when that is called for—and always in service to the story being told. Ultimately, there is truth in every one of the tales Beth Mayer tells, and that might just be the best trait for short stories in a collection to have in common.