Already before they cut him down, it began.
Under the sun dial of his winding feet,
The thirty silvers seeded the earth
And bush monkey flowers, rag weed,
Tear gut, goat’s heads rose.

The skewbald mares
That had stabled a beauty in what, until then,
Had merely been an average yard, ate bad weeps
And lay down until they changed to smoke
And the earth glared with ground glass,

And a man, fresh from his failure,
Threw out a white shroud—
Threw it out and did not stand to watch it
Wander on the wind like a blind girl
Among the cuddling drunks.

So the field became this station
Raging between the stations
Where oil sumped into the hard pan to mark—
Long after that orchard and its owner were gone—
The silhouettes of their lynched shadows.

And the property grew. Pastures gathered salt,
The barns chafed with a dry rot
Until it became custom to rob the place,
Steal from the communal junk piles
That spread out like a black bread across the valley floor.

The nails were the first to go.
Even as the scavenger’s hammers clawed them
Out of that trash lumber,
They groaned like lambs ignited in wind,
Then feathered away in the true story of rust.

Then the lumber was taken up,
It that had formed those cross beams
Was raised again to build those houses
Each standing so close and low
Their shadows lay down in piles of wolves.

At last, for their ulcerous blooms,
Even the thorns were prized.
Beneath their wreathes, families bowed their heads,
Closed their eyes, to say the prayer
That begins and ends in the traitor’s name. 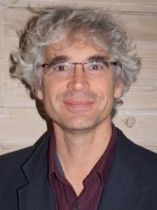 Andrew Miller is a poet, critic and translator with over eighty publications to his name. His poems have appeared in such journals as The Massachusetts Review, Ekphrasis, Iron Horse, Shenandoah, Spoon River Reivew, Laurel Review, Hunger Mountain, Rattle, and New Orleans Review. In addition, his poems have appeared in such anthologies as How Much Earth: The Fresno Poets (2001) and The Way We Work: Contemporary Writings from the American Workplace (2008). Finally, he is one of the co-editors of The Gazer Within, The Selected Prose of Larry Levis (2001) and the author of Poetry, Photography Ekphrasis: Lyrical Representations of Photography from the 19th Century to the Present (Liverpool University Press, 2015). Miller resides in Copenhagen, Denmark, with his wife and daughters.