Masks have taken on symbolic political power to the point where it is national news when a politician does or doesn’t wear one. Bill Stamets brings an anthropological lens to masks through his diligent documentation. A freelance photographer, film reviewer, and part time instructor, Stamets talked on the phone with Another Chicago Magazine about his series of photographs, which chronicle his trip from his Chicago neighborhood of East Pilsen to Promontory Point Park, where he goes for early morning swims. This routine inspired Stamets to capture the new type of litter that has become ubiquitous across the country: face masks.

Though his project is merely archaeological, the images of strewn masks take on a symbolic meaning for America’s ambivalence towards public health. He mentioned that the University of Chicago’s Library archive is “soliciting oral histories…so that there is a 2020 pandemic narrative. So when I found out they were collecting material I offered these photographs.” For Stamets, the importance of the photos has become an effort to capture our specific moment in history the same way archaeologists preserve history: through what’s left behind.

Stamets noted that it isn’t often that litter becomes such a profound window into the cultural and political moment in time, and it’s strange how quickly our landscape changes through our litter. In mere months public spaces in many areas have become mask graveyards. He likened these photos to a project he worked on in 2000 called Chicago in the Year 2000, funded by Land’s End founder and philanthropist, Gary Comer. This project funded over two hundred photographers to simply chronicle everyday life in the city for a full year, focusing on the mundane aspects of our existence, which also deserve preservation. Aspects like litter.

In some of the photographs, Stamets noted that when he places his iPhone on the ground to take his photos the “mask becomes monumentalized.” This view gives the abandoned masks a new scale, framing them as found sculptures. Stamets carefully framed each photo, trying to find beauty in the left-behind objects.

It is impossible to remove masks from their political implications. Along Stamet’s walk, he also chronicled various Black Lives Matter posters depicting Black people in masks. Stamets wasn’t sure who put up the posters he saw in Hyde Park, but figured they were an important part of his project. The juxtaposition of posters and dropped masks, which evoke the disproportionate effect COVID-19 has on people of color, gives a snapshot of the unrest in our current time. It also shines a light on the importance of small things, and the power that our everyday decisions—like wearing a mask—have. People’s social responsibility has higher stakes, and for many, it has become clear that they not only have a role to play in public health, but in a racist system. 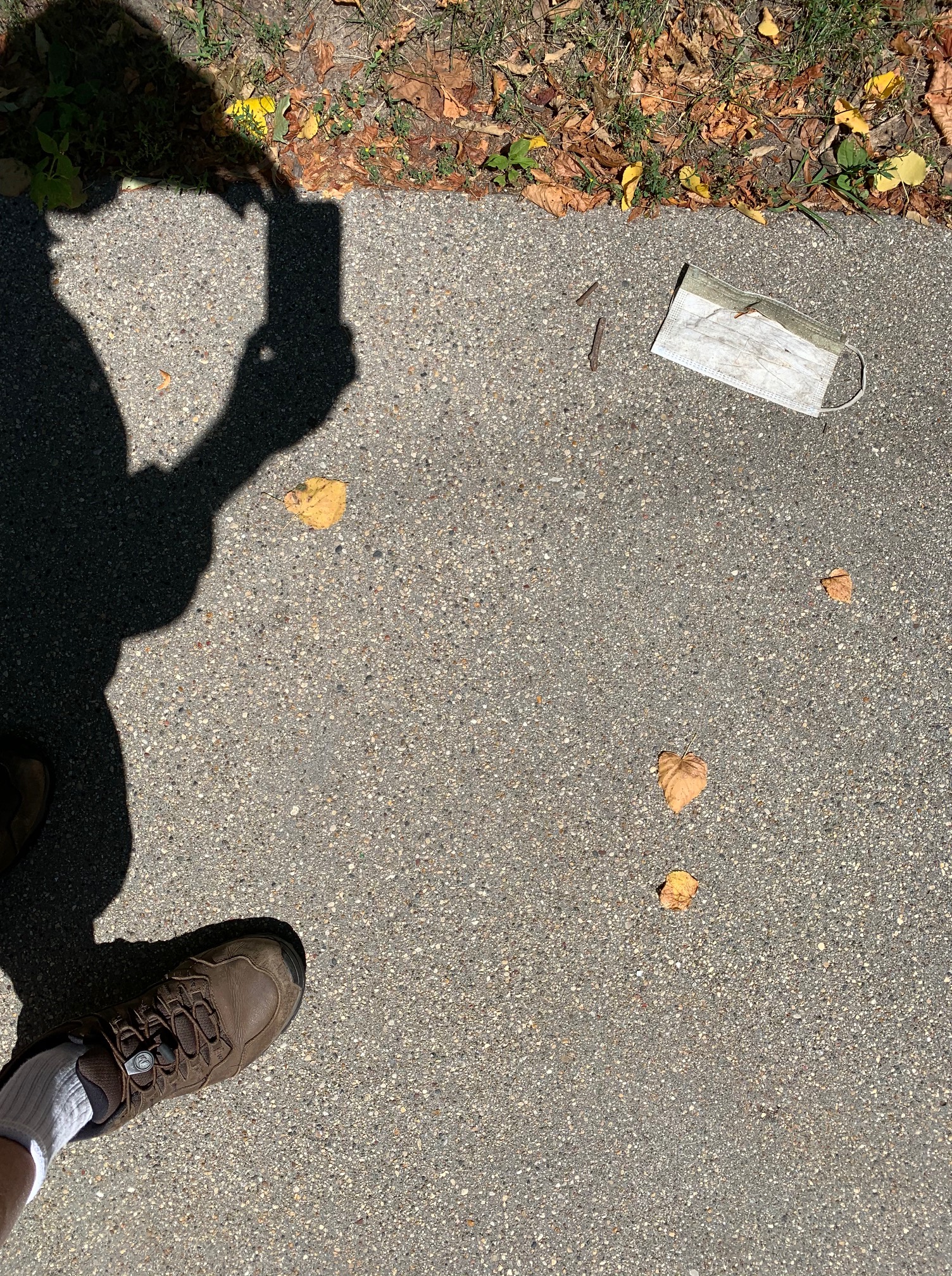 Bill Stamets is a Super-8 filmmaker, freelance film reviewer and news photographer, and part-time film lecturer in Chicago. He’s taught at the School of the Art Institute of Chicago and University of Colorado at Boulder. Most of his writing and shooting appears in the Chicago Sun-Times and Chicago Reader, one of his most notable projects being the Chicago in the Year 2000, documenting a year of life in the city. Currently Stamets is working on political documentary at the Chicago Film Archives and Media Burn, and making an iPhone video about waves, splashes, rain, rocks and sky at Promontory Point on Chicago’s southside lakefront.