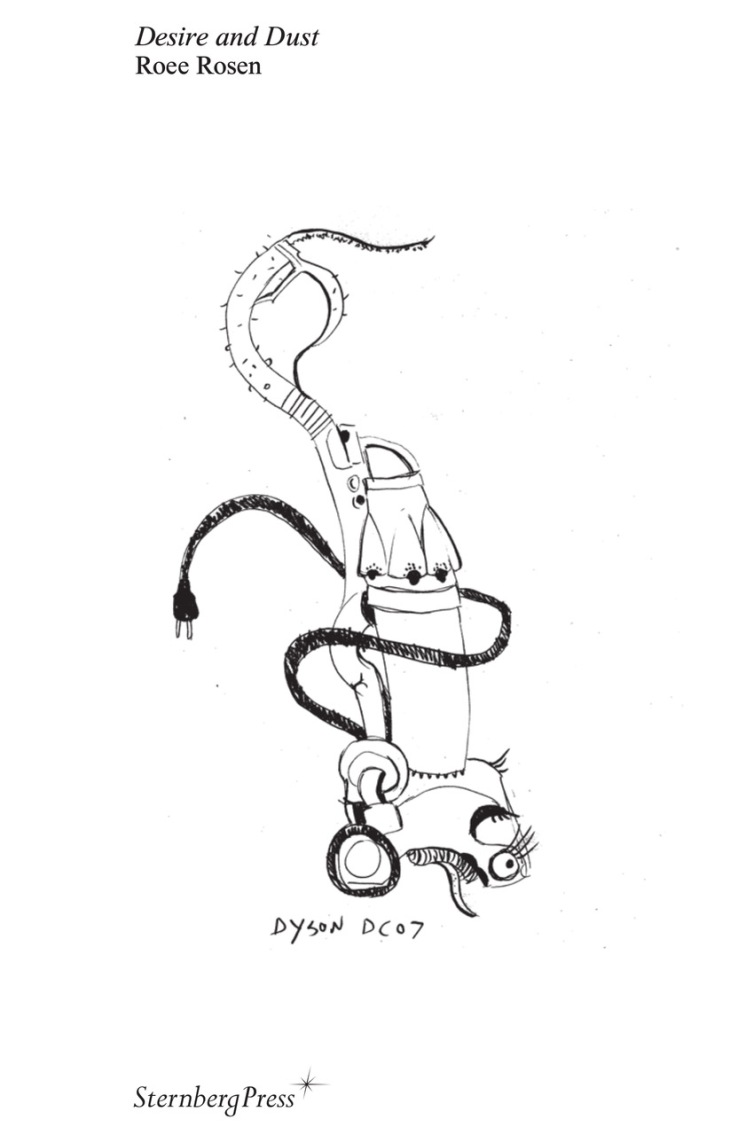 Roee Rosen is a writer/artist/filmmaker working under a wide-set of pseudonyms. Most commonly as Maxim Komar-Myshkin—whose surname translates to mosquito-rat—alluding to their writing, which often depicts distinct bodies/objects/identities being frankensteined together into haphazard amalgamations. Each of the artist’s identities operates within a larger scope of intertextuality. Commenting, contradicting, and expanding upon one another’s work. Rosen utilizes these various identities as a tool for embodying starkly different points of view, granting them the means to take apart and thoroughly examine each idea that they propose. Desire and Dust collects the works that Rosen has written under these various identities (often in the form of sci-fi stories, faux-academic papers, illustrations, and videos) and sets them within one volume, letting them mingle, fuse, and interact.

Utilizing zany science fiction domiciles to build a theory of the home appliance and its animate potential, Maxim Komar-Myshkin formulates a set of “animate chants for commodities” rendering various household surfaces with soft complexions. Chairs press their face on the back of someone’s neck. A guest in the house sets their bowl on the chin of the table.

A poet orates the summoning of a clothing iron. “Wake up, little iron…In 1960 Morphy sold his shares to EMI, / And after many wars your company was won by Glen Dimplex,” their chants evoking the history of this object—its manufacturers, owners, usages. The animation of the product is performed through the transference of this knowledge. Or potentially through the iron’s formulation of a self-knowledge. The iron becomes animate/sentient through the discovery and complexification of its identity, when it becomes more than the ahistorical little iron and expands into this anchored thing with a lifespan and habitat (the home). “Rise, Dyson Seven, Up, Up, Up!” the poet speaks with gentle encouragement. It is easy to imagine Komar-Myshkin walking through the house, stopping at each appliance, and announcing the required information for its awakening. 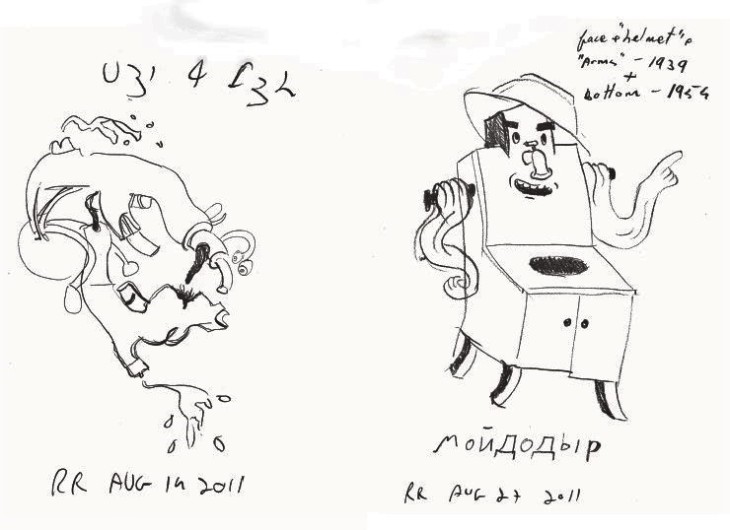 Supplementary illustrations paint the process as whimsical. With the aesthetics of a fairytale—someone sitting at their table with joyful furniture abound. The relationship between subject and object shifts. It becomes more emotive and multidirectional. But still, the position of the appliance is that of the laborer, only now they take on additional functions. The little iron is expected to simultaneously perform physical and emotional labor. The small residential dwelling becomes a forum. A populated hub in which the homeowner now orchestrates the activities of his subservient appliances.

But this shift in function causes certain anomalies in the composition of the object. As the illustrations progress, appliances become more organic. Humanoid appendages are transplanted onto their body. They enter a cyborgean position, melding the organic and the mechanical in the reverse order of the traditional cyborg. The organic being sutured to the mechanical rather than the mechanical to the organic. A cyborg that begins as a toaster, and whose cybernetics are a set of legs or a blanket of skin. An iron wearing a man suit. The inanimate is contorted into a humanoid shape. Grinning with a stark uncanniness or dancing on loose limbs. These meldings are often haphazard. More addition than integration. Komar-Myshkin plays the role of mad scientist, sewing together unsettling organisms. Testing their stability and longevity.

The “human-vacuum cleaner reproductive process” proposes an ultimate kind of homeliness. It is the idealized interaction between consumer and product under the gaze of hypercapitalism. The consumer is bonded to the product. They not only purchase it, use it, advertise it, but they produce further units as well. The consumer becomes the laborer. Dysonsexuality is a means of production. Assembling a new labor-source. A set of humanoid entities whose consciousness is tied to a body with set functions. The appliance-human cyborg is human in its sentience, but appliance in large swathes of its anatomy. Its body holds the blueprints of the vacuum, this base functionality as a tool for cleaning.

There is a kind of nightmarish image that surfaces in this discussion of the dysonsexual. Painting this picture of the eroticized object and a guerilla marketing that traps the consumer in a prison of their own desires commodifies this attraction and uses it not only to produce money for the vacuum company, but labor as well.

Rosen and his pseudonyms seem to be fascinated with irony and subversion. Pairing counterintuitive terms and concepts together. Tying the subject to the object, the product to the consumer, the body to the machine. In later sections such as “The Dust Files,” trash/junk is converted into value. Grime and dust are found to contain mass amounts of information, nanomachines, nanochips. They become highly sought after. Members of society sift through junk piles and collect all of the dust that they can.

Most often it seems that Desire and Dust is attempting to map out the mutative potential of value. How easily it can shift and reorient into an entirely foreign system. Is value derived from labor? From economic factors? From sentience? Technological advancement? It seems that these systems are often overlapping and difficult to distinguish. Is the value of sentience in its ability to perform labor, to formulate technological advancement? Is the economic value of a product determined by its rarity or its usability? I’m sure that there are answers to these questions, but more it seems that Rosen is concerned with the interplay of the variables within the question, not the answer.

Desire and Dust is a map of the inanimate and its ever-changing qualities. Its cyborgean potential, and the way it might fluctuate from object to subject and back again. And Rosen’s prose/illustrations are incredibly adept in engendering these mutative scenes. Painting faces on furniture and suturing the resident to their domicile. The worlds depicted feel alive and active, partially thanks to Rosen’s range of pseudonyms. Each adding a new voice and personality to better inform the circumstances of the inanimate. Desire and Dust is an incredible collection of work, seamlessly blending distinct mediums into one cohesive tome.

Mike Corrao  is the author of two novels, Man, Oh Man and Gut Text; one book of poetry, Two Novels; two plays, Smut-Maker and Andromedusa (forthcoming from Plays Inverse); and two chapbooks, Avian Funeral March (Self-Fuck) and Spelunker. Along with earning multiple Best of the Net nominations, Mike’s work has been featured in publications such as 3:AM, Collagist, Always Crashing, and The Portland Review. His work often explores the haptic, architectural, and organismal qualities of the text-object. He lives in Minneapolis.