He’s in the woods somewhere down a trail off a main trial and down through the stickers and the ferns in a cedar grove where he can see out but no one can see in. Some of these fallen tees, the hollow rotting ones, if you touch them you can feel the vibrations of people hiking in the distance. I can feel him listening with his hands, like a spider feeling the tremble in its web.

Because from the elbow of 56th and Manning you can see Bainbridge Island and the green hills, the Winslow cove and Indianola point, and on the other side of the sound the outjut of Magnolia and way up there maybe that’s Whidbey. I think that’s Whidbey Island, Useless Bay…out…the mind travels over it and out. 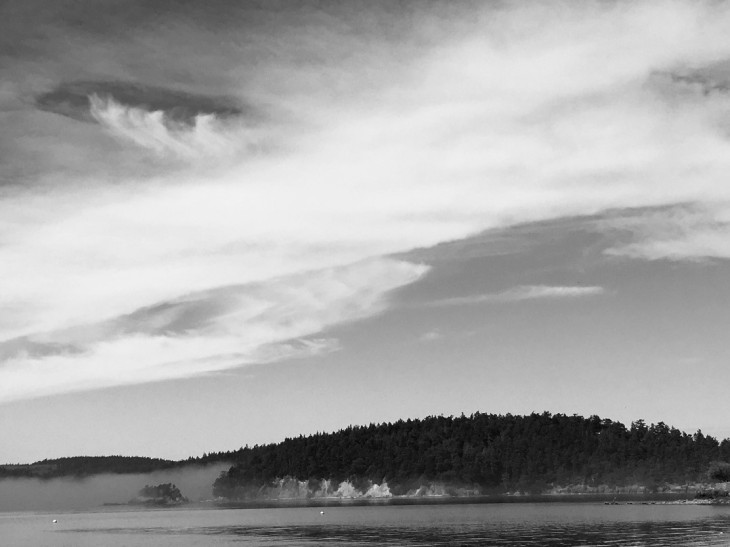 The God tree on Spokane and 59th, curved to the edge of the sky. The long building on sticks pointing west from Cormorant Cove, each apartment with its one little glass balcony overlooking the sound, waves rolling in, an altar on the shoreline with roaches and vials. And 65th between Stevens and Admiral is a time warp maybe because it’s below sea level, since look here see a shanty style slant-roof A-frame, cord wood stacked up on the porch, green sea-muck boat on a trailer on the lawn, and then a few steps more, a grotto home with Dr. Seuss sculpted trees and blue illuminated hedges and the deep forest garden lead-lined windows glowing beyond the horseshoe driveway so far back you can barely see and right here a vivid primitive kid on a bicycle riding round and round. 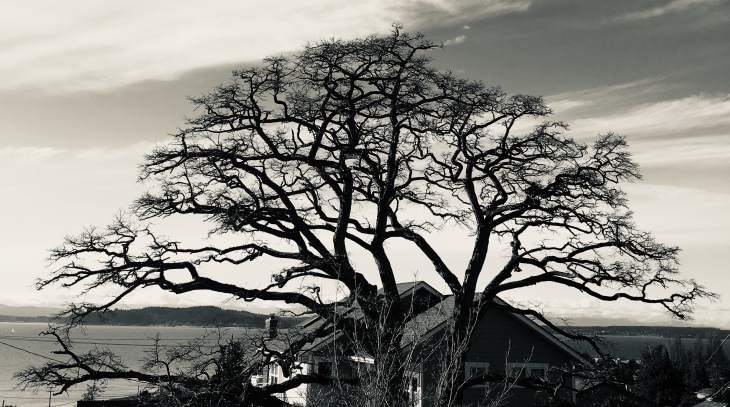 And there at the end of Wilton Court where only the warm wind and the jasmine and the lavender show up under the street lamp, someone’s got a barbecue going, a party going, smoke and laughter rolling up into Bar S field…it’s the last corner of paradise, here, evaporating like spit on a hot sidewalk. And Glad Harbor, at the end of the strip, is a Hollywood house with a bank of ceiling to floor windows wrapped around and looking southwest from the point, the ghost of Frank Sinatra smoking on the sunset patio, the little fountains trickling away, a woman walking right through the ghost of Frank Sinatra, her summer robe full of the sea air. 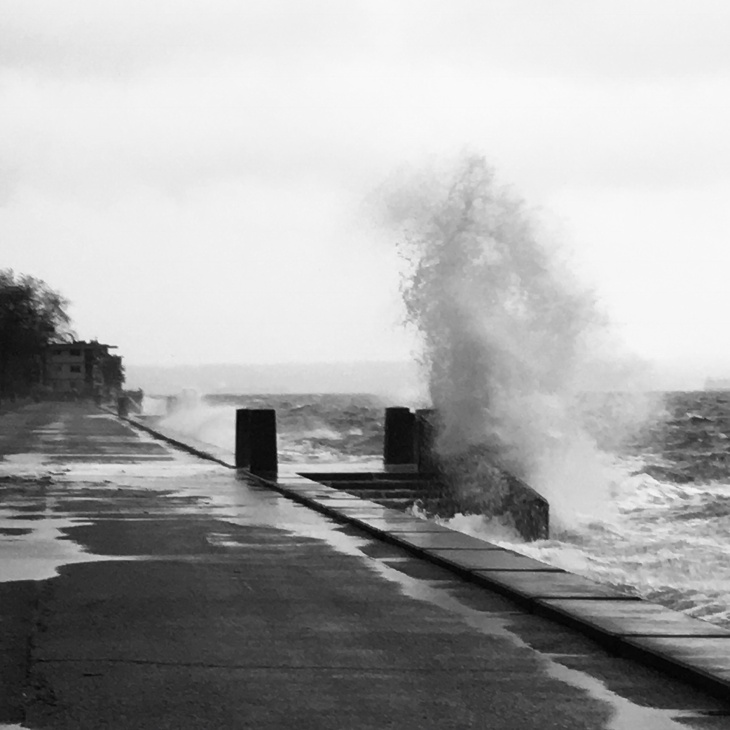 The lighthouse, the nautical Blue Dolphin townhouse with bamboo growing up the middle of the spiral staircase, and that ramshackle place down the gravel drive behind the lighthouse, again, something once elegant but now element-worn and coming apart, I stumbled there one night from the Celtic Swell with some new friends, saying, ‘Ever notice those high-tone flat-bottom clouds slow gliding across the sky, but when you look…when you really look…you see the big heavies and the fringes and those thin sheens like slips of paper, and they’re all going different speeds, different directions even, some barely moving at all because wind is multidirectional, currents and cross-currents and eddies and still spots—so, what I’m wondering is, how it fractal-like resembles other systems, real or theoretical…I mean, water…time…a life. Haven’t I seen you before?’ and found myself watching a couple on their couch going at it, a Road Runner cartoon on the TV, and did it say Looney Tunes or Looney Toons?

Some mornings, most mornings, I wake up and everything is the same but feels different. A slight rearrangement, a few missing pieces, a few things there that weren’t there before, and the little commentator types in…continuity error! I push through and accept this version of reality, even with those little black spiders at the edges of things that disappear if you look directly at them but show up again when you look away, like little black holes with tiny legs, and they’re eating the fabric of the dream as they go.

Then it’s the ride in with the self like a baffling professor on a long flight, and he’s going on about the woman who wrote Shakespeare’s works, interesting at first and then a drone-dead sky blasted open with no parachute to cling to, orange fuzz growing out of my hands, eyes seeing in all directions, that sound like a ball vibrating deep inside the head, rafters creaking, earthquakes and big winds and needling, ground-emulsifying rain…let’s see you watch your face dissolve and everything down to the letters, and then join me, drinking till three, but I had a good run going on the pool table, saw every shot before it happened.

When I went to bed I spun for a while without center and ended up here, and I tell you I finally get it after all those shots how you can sink a life and rise from a dream and leave those friends stuck in the iron butterfly and the white snake burning in a ditch of fire and glide over a still lake and leave no shadow, say I’m stoned and push away reflecting sky, and still live to tell about it in a way no one expects, even if they’re not surprised.

Douglas Cole has published six collections of poetry and a novella. His work has appeared in anthologies and in The Chicago Quarterly Review, The Galway Review, Chiron, The Pinyon Review, Confrontation, Two Thirds North, Red Rock Review, and Slipstream. He has been nominated twice for a Pushcart and Best of the Net, and has received the Leslie Hunt Memorial Prize in Poetry and the Best of Poetry Award from Clapboard House.