Editor’s note: We’ve never published straight news stories before, but we believe this piece is timely and important and most of all, the subject has been underreported.

Audrey Wright, a senior at North Lawndale College Prep, described the unthinkable to a packed Harris Theater audience in Chicago February 15. She lost her mother and brother to gun violence within three days. The following year, she lost her father.

“I was introduced to Peace Warriors at my school, and I now serve as its president,” she told more than 1,500 people who gathered to learn more about combating gun violence. The Peace Warriors support other students affected by gun violence, they run a summer jobs program and they “interrupt nonsense,” she said.

Core to their mission is to do condolence runs to students who lost a loved one, delivering sympathy and an opportunity to process their grief. Last year, in 183 school days, they did 178 condolence runs.

Wright spoke at a gathering called Cities Striving for Peace: What Chicago Can Learn from Five Big-City Mayors who Successfully Lowered Gun Violence. The event was organized by Chicago CRED (Create Real Economic Destiny), an organization funded by the Emerson Collective, led by former U.S. Education Secretary Arne Duncan. Participants were introduced to four Chicagoans taking an active role in addressing gun violence, and they heard from former mayors of five other cities who saw dramatic drops in gun violence during their tenures.

On the same day as this event, a gunman opened fire at a manufacturing plant in suburban Aurora, killing five and injuring five police officers. Ironically, coverage of new gun violence bumped coverage of the forum.

“If the community doesn’t trust your police department, you are not a safe city,” said Betsy Hodges, the former mayor of Minneapolis.

The Chicago audience voiced agreement with Hodges. The right leadership for, and community trust of, the police department is critical, the mayors said. Adrian Fenty, former mayor of Washington, DC, credited much of DC’s homicide reduction to hiring the right chief: Cathy Lanier—a woman from the community who came up through the ranks.

Law enforcement, all of the ex-mayors stressed, is only one piece of the puzzle. “Law enforcement is going to get you as far as it’s gotten you,” said Hodges of Minneapolis. “Every part of the city has to be engaged and you have to be focused on the causes.”

Residents of the most violent neighborhoods in Minneapolis were asked to develop their own community-based strategy to address crime. And then the city invested in those strategies. “It was public budgeting meets public safety,” said Hodges. And it worked. Minneapolis saw a 23 percent decrease in homicides under Hodges. 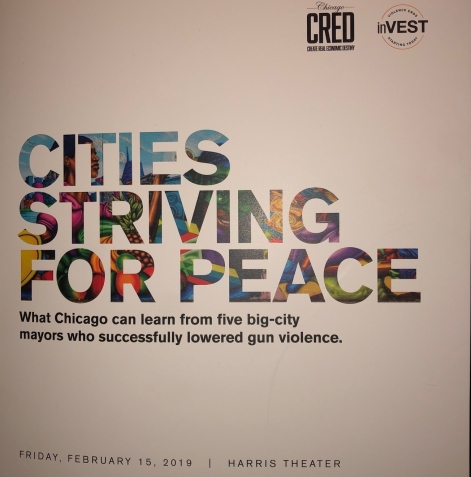 Former Los Angeles Mayor Antonio Villaraigosa pointed to a critical program called Summer Night Lights. “We opened eight, 16, then 32 parks in the places of highest gun violence in the city,” Villaraigosa said. “We were open from 7 pm to midnight, Wednesday through Sunday. It was midnight basketball on steroids. We did soccer, Zumba for moms, we had movies, we fed people. And we invited gang members. We said, ‘come to the park – you are welcome.’”

They saw a 75 percent reduction in gun violence in those neighborhoods. “There were problems from time to time,” Villaraigosa said. “We had a couple shootings near the park on nights when we were open.” The response to the problems were predictable: some people wanted to shut down the parks. “But we stuck with it because we knew it was working.”

Concentrating resources was also key, he added. Public safety dollars were not distributed evenly across Los Angeles. They were spent where they were most needed. L.A. also started an academy for former gang members. The police department objected to the academy, but the city did it anyway. As a result, retaliation shootings went down dramatically.

Overall, homicides dropped by 48 percent while Villaraigosa was mayor.

Mitch Landrieu, former mayor of New Orleans, emphasized the need for early education not just on math and science, but on conflict resolution. “You have to create places where these young men have sustenance,” he said, whether that’s through music, recreation centers, libraries or other programs.

“If you give a kid love, opportunity, security, resources – they are going to act like everybody else in America who has all that,” said Landrieu.

Michael Nutter, the former mayor of Philadelphia, stressed the need to set an ambitious homicide reduction goal and to “hold yourself publicly accountable to reaching that goal.” Philadelphia took early public policy steps to ensure the positive re-integration of people who had served time in prison. The efforts ranged from “banning the box” on job applications that asked about criminal records, to providing tax credits to employers who hired returning citizens. Philadelphia saw a 24 percent decline in homicide rates under Nutter.

All of the mayors talked about the critical role of schools: from quality early education, to strong high school programs to keep kids engaged and in school. Fenty emphasized that the core of his anti-violence approach was to fix the public schools. He drew some grumbles from the audience when he chastised Chicago for challenging Mayor Rahm Emmanuel when he made what Fenty called “the hard decisions” to improve schools, including closing some of them and lengthening the school day.

Nationally, we’re having a conversation about what constitutes an emergency, said Landrieu. “In the U.S. since 1980, 630,000 American citizens died as a result of guns. Many were murder. That’s more Americans than were killed in all of the wars of the 20th and 21st century. So, what’s the emergency?”

Other local speakers who opened the event included:

“This is what I believe,” said Arne Duncan, after he introduced the mayors. “I believe our actions don’t justify us saying ‘black lives matter.’ I believe that in so many situations we’re not giving these young men a second chance. We are giving them their first one. These young men have been failed. And I believe our young men are the solution, not the problem.”

Marrianne McMullen, a former journalist and labor union communicator, served for six years in the Obama Administration. She is now the director of communications
and dissemination at Chapin Hall
at the University of Chicago.