What percent BY A MILITARY OPERATION
can we ingest?

Therefore, bodies NOT BE EXCEEDED BY other bodies: THE COLLATERAL HARM
in wanting more than a hug, in wanting to suffocate with unlove
such as THE LAW OF WAR

Can we be allowed small things? Can we take the PRINCIPLE to extremes that we are
fair, OF PROPORTIONALITY, can we undamage the body?

You who REQUIRES COLLATERAL DAMAGE. What are the street dogs to CIVILIANS
AND CIVILIAN PROPERTY that you count them as twice a life, or NOT BE EXCESSIVE
with your definitions of love IN RELATION TO THE MILITARY

Such that the ADVANTAGE EXPECTED is a quiet door behind which you are waking,
waiting TO BE GAINED, consumed by bullet or trash packed into a milk jug

What do you love BY EXECUTING THE OPERATION? Let some bodies go and some bodies
dream that they are SOLDIERS AND MARINES and pianists

You must TAKE ALL FEASIBLE PRECAUTIONS WHEN waking them
if they are not deemed ready. When you are in a better position to caress a body,
CHOOSING MEANS AND METHODS OF ATTACK that are best for the body

TO AVOID AND MINIMIZE LOSS OF CIVILIAN LIFE: turn the body over, identify the body, clean the body, pack the body

in an urn, an INJURY, an incomplete gesture TO CIVILIANS who live as damage AND DAMAGE to village, TO CIVILIAN OBJECTS, to be erased as whole

Go With the Grain

from APPENDIX A of the U.S. ARMY/MARINE CORPS COUNTERINSURGENCY FIELD
MANUAL

DO NOT TRY TO CRACK THE HARDEST NUT FIRST. Instead, start with the weak pecan,
the overripe acorn. Let the shells dance over your knuckles.

DO NOT GO STRAIGHT FOR THE pericarp and seedcoat or attempt to split sections. You will find the MAIN flesh flavor INSURGENT upon first taste. Each tree a STRONGHOLD for the wet-mouthed.

Do not overeat OR TRY TO TAKE ON whole trees. Try fruits and VILLAGES and grains THAT SUPPORT the full-bodied INSURGENTS of nut flesh.

Consider the farmer, the fingers grasping fruit, fingers which EXTEND INFLUENCE THROUGH the mouth, the rest of our body.

THE LOCAL PEOPLE’S eyes will tell you which nuts to try, fruits or grains. They are NETWORKS of seed that you can pulp and pulp and pulp.

GO WITH, NOT AGAINST, THE GRAIN OF THE LOCAL POPULACE. You may find the experience dazzling, but do not get consumed.

FIRST, WIN THE CONFIDENCE OF A FEW VILLAGES before you ask for more. Always
ask for more.

AND THEN WORK WITH each tree until you make a home for yourself. You must envelope THOSE WITH WHOM THEY TRADE, INTERMARRY, OR DO BUSINESS in order to secure nuts with the most mellow flesh.

THIS TACTIC DEVELOPS golden undertones that may spread to lips, even your chin. In the event that you cannot find LOCAL ALLIES, consider that we may pulp and pulp and pulp again.

Never mind A MOBILIZED POPULACE, especially one without any guns, AND TRUSTED NETWORKS, the trees.

How to Bomb a School or a Hospital

Why Did ███████ Join if They Knew What They Were Signing Up For? 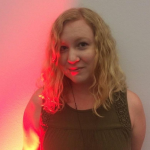 Jennifer Conlon holds a MFA from Arizona State University and a BA from the University of North Carolina at Greensboro. She was awarded the 2017 Katherine C. Turner prize from the Academy of American Poets, the 2015-2016 Aleida Rodriguez Memorial Award in Creative Writing, and a 2016 fellowship from The Virginia G. Piper Center for Creative Writing. Her poems have been published by or are forthcoming in Four Chambers Press, Blue Earth Review, Meridian, Bennington Review, Heavy Feather Review, and elsewhere. Jennifer lives in North Carolina.