Went to the Aldi supermarket next door to the Auslanderbehorde, the most haunted building in Berlin, the immigration office. The (white) German man in line before me, face covered in white prickly stubble like a cactus, smoker’s skin– almost purple, bought seven packages of toilet paper and seven packages of paper towels. Sizing him up with my scorpion eyes, I decided he was not buying the items for a bar or cafe, but his own asshole, and perhaps his ninety-eight-year-old German mother he still lives with. I imagine she must live for wiping the counters hourly, possibly since World War II. What’s the big fucking deal? Use water if the world stops mass producing toilet paper.

Anyway, even Berlin is shutting down bars, cafes, and we’ll probably all drink outside the Spätis while the terrified revolutionaries binge on Netflix and on the dry pasta and flour in their overcrowded, tumbling kitchen cabinets.

Other than that, no, there is not much to say. The sun is out, the sun is down. The old Turkish man working by the Späti around the corner screams, ‘Corona!’ like Stanley Kowalski in A Streetcar Named Desire screams for ‘Stella!’ as I bought bubbling water and shoved my hands in my pockets away from the cold night.

I’m taking this as an opportunity to order more of Helene Cixous’ books, among others. Found a Ferrante novel in Curious Fox Bookshop, bought that too, probably not her best, but still so relatable, so desirable. I’ll go cook my Aldi ingredients now among all this silence.

The fear escalates. Information circulates, USA continues to deepen their divide and overload their Twitter news accounts, absorbing the power of information and the way it controls their hormones, their anxiety, their purchases. Ding, ding, ding, their phones command them to look and they look.

I went for a bike ride in the warm weather. Checkpoint Charlie, normally crowded for smartphone photographs, now abandoned. The random faces of the military officers facing the East, facing the West, back to back, I imagine are wondering what they’ve done wrong, distressed if they’re no longer relevant.

Kreuzberg is empty, though some locals try to sit outside the cafes that are still open for coffee and sun, trying not to talk about C.

I lock my bike by Hermannplatz. Standing before me is a beautiful African man with small braids, one front braid ending with red, yellow and green beads. I pause before I lock my bike to look at him. I can’t stop looking at him. He stands before his bike. I smile, he smiles and says something to me as he walks his bicycle away and I say, ‘What?’ and he says, ‘Have a nice day sister,’ in English and vanishes. The whole ride back I’m repeating this line in my head, ‘Have a nice day…sister,’ and try to shake it off, it feels too good, there’s too much ease in his low voice, his words, his smooth skin, his comforting face. Sister and he disappears. Humanness cannot be expunged from the people who aren’t afraid.

We continue to divide ourselves according to the provocations of the media, shake our heads from the other’s stupidity and ignorance, and continue to consume from the capitalist machine, where moguls like Trump continue to win. Why are politics such an emotional trigger? I can’t write, I can’t focus because of this paranoia leaking through the computer, the phones, the walls.

I’m drunk on white wine. Met Jose in gorlitzer park, which I can’t seem to spell out right now. The Frisbee guy was still there tossing his Frisbee. The sun was out. African men piling up on park benches, fighting, talking, huddling together under the cold sun. Scattered dog walkers sitting in the park bowl with their dogs. I tried to pee in privacy but the bushes have not grown back. I had to step over a pile of human shit to find an obstructed setting, bare ass to the graffitied brick wall.

Spoke too much to avoid moments of silence with Jose, terrified to admit there really was nothing to say. Pretended to say good things about people so that I wouldn’t be that person who only says bad things about people. Can’t stop wondering what Mark would say if he were alive today. 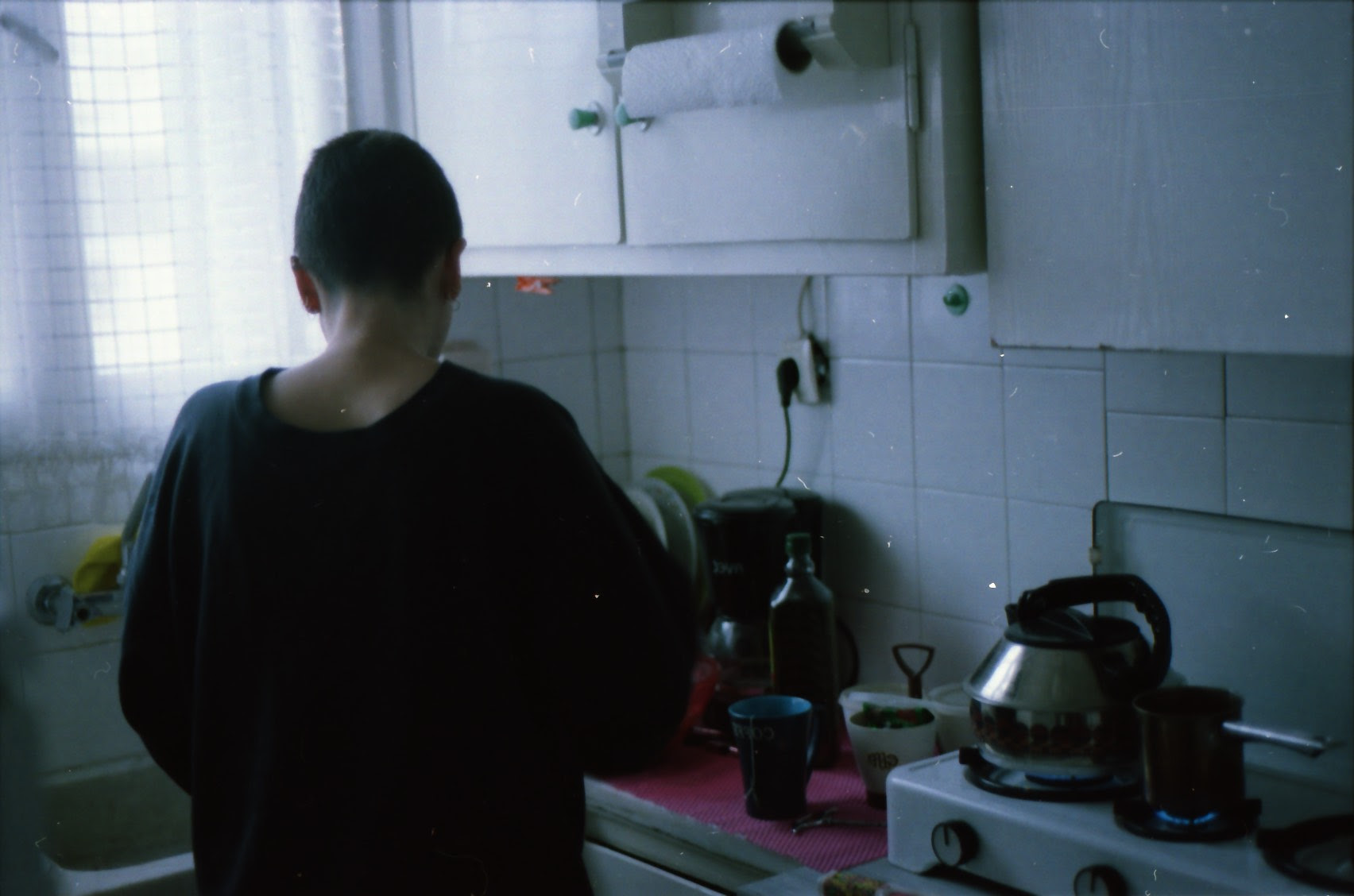 The radio is playing from my kitchen, ‘ooooo….knock knock knocking on heaven’s door….’ Plants in my flat have grown in full and robust. I can’t settle my nerves electrified by all this fear, though wine can. My brain is a fish tank floating in trocken wine.

I’ve hung up a four-by-four black-and-white photo of my grandfather with a Hitler mustache taken after he survived Auschwitz, in my kitchen. Another photo of him with his Hungarian horse in the countryside.  Hung a wood carving of a woman’s face from Mark’s apartment. He once told me there were two faces, but someone who rented his flat broke the carving of the man’s face, among other things, he was very bitter about it. Her expression is very serene, almost too serene, she frightens me, I expect she’s watching me, but in my kitchen I have nothing to hide.

My cheeks are flushed from the bike ride, but more from the wine and the hot food.  I’ll make a calendar for myself, to steer a little direction to my days, otherwise I end up cleaning my apartment, too afraid to write, to commit, to say something.  Helene Cixous is still alive, eighty-two-year-old Gemini, I’m considering writing her a letter, another fantasy of mine.

At least the grass in gorlitzer park has an opportunity to grow during the madness….