I’m a former competitive gymnast who was training to be elite until I was 16, with a decade of competition behind me. I quit because I had a nagging shoulder injury that would not go away and I was exhausted–emotionally, mentally, and physically. I stopped caring and wasn’t able to do basic elements I’d been able to do easily a year before. And my school started offering International Baccalaureate (IB), which I really wanted to do. Because I couldn’t be in the gym 30 hours a week and also complete IB, it was a convenient excuse for me to quit. My coaches’ style, you could say, was similar to the stories you’ve heard about the Karolyis’ style–“toughening girls up” with denial of our physical pain, psychological games, and insistence that we were too fat. To be clear, though, none of my coaches or doctors ever sexually abused me.

For all women who trained as competitive gymnasts, especially those whom Larry Nassar or other doctors or coaches abused, I have only two questions:

1) Would you put your daughter in gymnastics today?

Shawn Johnson East, the Olympic gymnast who won several medals in Beijing in 2008, released a video on January 23. In it, she said that considering the current state of USA Gymnastics, if she had a daughter, she would not put her into the sport. I certainly would not. The sport, like so many other sports in the US, values accomplishments above athletes’ health, safety, and well-being. This organization, like so many other arenas in which women are objectified, appears to value men’s careers above girls’ health and sanity. I would never want a daughter of mine to think her worth was tied to the color of a medal around her neck, a medal she must win at the cost of her psyche. 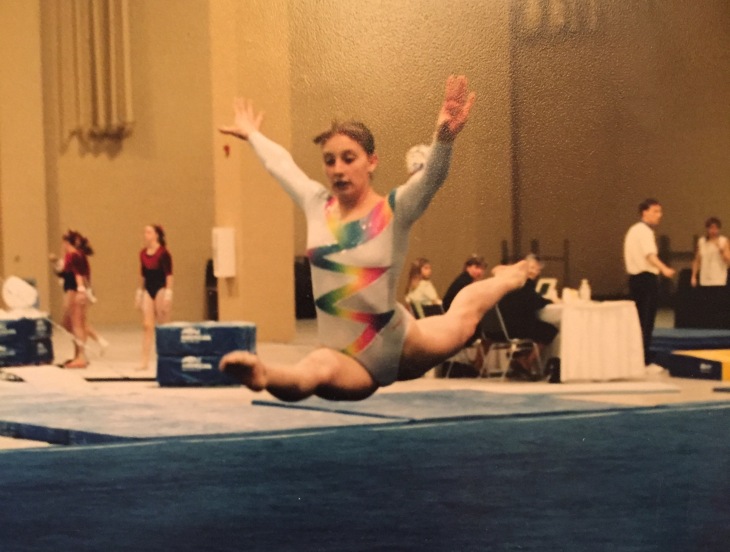 2) What changes must USAG undergo to make it safe for girls to participate?

I have seen many suggestions I like: Have former gymnasts serve as USAG board members and make it a requirement for girls in gymnastic to stay in school until age 16, for example. I’d also require coaches to take continuing education on at least the latest injury-prevention techniques and Pilates. But what I really want is for the women whose voices were silenced when they were children to stand up and say how they would change it. When I think of my own rage at not having been heard when I was hurt or scared, I imagine the rage of these women, whose trust was betrayed in the most horrific way, must be tenfold. I truly want the hundreds of women who have spoken up about their abuse to show us the way forward for gymnastics, if there is one.

Here is a photo (below) of the former competitive athlete, newly age eight, in her new amateur career of bed-jumper. [Photo by S.L. Wisenberg]

Allison Kaplan Fink is a former gymnast from Aiken, SC who competed in USAG Levels 4-10 from 1991 to 2001. She lives in Austin, TX with her husband, Jeff, and works for the county as an urban planner.