After the Hospital Waiting Room

It’s times like these we don’t eat.
Not that we’ve forgotten to, but
more like our body forgot its need.
In times like these, the body
is occupied by other hungers,
the emptiness not from not eating,
from the potential of loss, of death.
The body wants to fill itself,
so at night, after leaving the hospital’s
burning antiseptic scent,
I drag my empty body to your house, Stag,
and let you fuck me quickly, repeatedly,
filling me with your need for me,
the void between my heart and stomach
briefly satisfied. Your clean laundry
and pine odor sticks to me,
disguising the scent of another death
I’ll never be ready for.

When Asked About My Grandfather’s Death

It was sudden and not so sudden
as when after some time and none at all
you reach mutual climax, thinking
it would never happen but knowing
with the rhythm of this man
you’ve known before, like you
know death—knowing both in the end
would come. 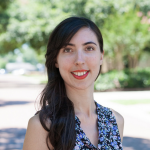 Anastasia Stelse is a native of southeastern Wisconsin, the former assistant editor for The Intentional, and a graduate from the MFA program at American University. She is currently pursuing her PhD in creative writing at the University of Southern Mississippi’s Center for Writers. Her work has appeared or is forthcoming in Fairy Tale Review,  (parenthetical), and  Meniscus, among others.