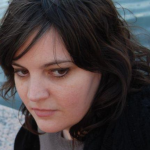 Stephanie Rogers grew up in Middletown, Ohio and now lives in New York City. She was educated at The Ohio State University, the University of Cincinnati, and the University of North Carolina at Greensboro. Her poetry has appeared or is forthcoming in journals such as Ploughshares, Cincinnati Review, Southern Review, Pleiades, Ninth Letter, Copper Nickel, and New Ohio Review, as well as the Best New Poets anthology. Saturnalia Books published her first collection of poems, Plucking the Stinger, in October 2016.