At our annual Passover seder, my family uses what my late Great-Uncle Howie called a “drinker’s Haggadah.” Only eight pages long in bulky old-typewriter font, our Haggadah

cut all the fat off one of Judaism’s meatier holidays but spared none of the juices, as the prayers for all four cups of wine are still mandated in our more-than-slightly shortened service. The only Hebrew in the booklet is phoneticized and the English is riddled with typos my father corrected in blue pen, the most notable being the repeat of beasts as both the fourth and seventh Egyptian plague. Three years ago, my mother took a red pen to the bottom of the plague list, adding Donald Trump as the eleventh plague we must acknowledge. This year, a twelfth plague has been added: Coronavirus.

While the Goldsteins host Yom Kippur, and Great-Aunt Julie—though now sadly without Howie—still does Thanksgiving, we are always the ones to do Passover. Well, really, it’s my mother who does Passover, while the rest of us sit around indulging in the smells of the kitchen and getting in her way. As if her brisket, matzah ball soup, roasted potatoes, sweet potatoes, green beans and chocolate matzah aren’t enough, she can always rely on her mother Mimi to bring kugel that no one really wants but tries anyway; Aunt Julie, to bring the world’s best mini cheesecake muffins (no yeast); and the Goldsteins to provide themselves with whatever vegan concoction their green hearts desire. This year, as dusk approaches to commence the traditional events, we prepare the dining room as we always do, pulling out our fancy maroon table cloth, silver candlesticks, and the china plates Paula Rich bought my parents as a wedding gift twenty-five years ago. But instead of our usual fifteen place mats, we only set five.

As I come downstairs, the final flickers of sunlight passing through our diamond-paned stained-glass windows and onto the wooden floors, everything feels off. For one, I am in sweatpants on one of the holier nights of the year. For another, unlike every other family holiday I can ever remember, I can actually hear my father’s jazz albums playing through the ceiling speakers. There is no cheese and chopped liver plate, no sharing of stories from time spent apart, not even a bottle of wine uncorked a little early to get things going. In the kitchen, our dog lies bored in his bed. My sister clicks the pen between her teeth as she works on the New York Times crossword. My mother is calm. On our seder plate, a leftover frozen Buffalo wing replaces the shank bone, some cilantro from our window garden subs in for the parsley, and someone decided to throw in some sauerkraut as a somewhat morbid message to never forget what our German ancestors left behind. This rendition of our annual tradition feels like a child’s attempt to finger-paint a masterpiece. Nevertheless, our Passover seder in the year 5780 begins. I open my computer.

Minimizing half-written essays and PDF scans of assigned class readings, I double-click Zoom, an app that four weeks ago I knew nothing about, but now can navigate with my eyes closed. My grandparents in Florida have somehow managed to join the call twice; my uncle’s kids have changed their background to outer space; and Mimi and her boyfriend, sitting neatly and unsmiling, look like a quarantine version of Grant Wood’s “American Gothic.” Slowly recovering from the virus, Uncle Dave and his girlfriend join us from their bed, coughing occasionally in upstate New York. Trapped in Arizona from a vacation-turned-foreseeable-future, Uncle Dan and his kids wave hello and show off their pool. Three families in New Jersey, two in New York, one in Boston, and another in Portland—even cousin Chloe listens in on her walk home from work in Dallas. It’s the biggest seder we’ve ever had.

We begin with the lighting of the candles and the first cup of wine followed immediately by the second. My grandma complains she cannot see her youngest grandson, but she is relatively ignored. When we eat the karpas, my sister forgets that it’s cilantro instead of parsley and runs for the bathroom to spit it out, stepping on my dog in the process.

When the chaos settles, my aunt reads aloud from her freshly-printed copy of the Haggadah: that we dip this symbol of spring into salt to remind us that life is not always sweet. She pauses after that last part. Moving to the matzah, we break a piece and pass it around while my cousin leads us in Hebrew that says tonight we eat the matzah in freedom, but we have other freedoms to win. Stuck in our homes for the foreseeable future, grunts and mumbles follow. I assume everyone is wondering when we’ll get to that third cup of wine when we turn the page to find ourselves at the seder’s pinnacle moment—the asking of the four questions. Together, we ask, Why is this night different than all other nights? Our Haggadah, of course, doesn’t take the time to answer this question. But tonight, no Haggadah would be sufficient.

Our youngest cousin out in Portland begins chanting and my mind begins to wander. Every day it gets a little harder to force myself not to think about what life would’ve been like if everything were normal. Days slip into other days, old familial tensions dust themselves off. Passover is usually days of tradition and evenings of joy, a celebration of Jewish freedom. But Passover has become another marker that during this pandemic, nothing is the same. And nothing seems to be getting better.

As my brother repeats the fourth question in English, we absently applaud our visibly proud eight-year-old cousin who bows and bows into the monitor. But everyone has moved on to—as if it wasn’t obvious—the third cup of wine. We turn the page once more and find everyone’s favorite, the catchy, repetitive “Dayenu” chant. The title means “It would have been enough.” The Hebrew song was written more than a thousand years ago to thank God for each individual thing he did for us as he led the Jews out of slavery and into Israel. In seeing it, my complaints over the loss of a spring semester and even the loss of a standard seder begin to feel silly. Dayenu—thank you God for helping us to be here in the first place. It would have been enough if that that were all you ever did.

I’m filled with newfound appreciation and ready to sing, but quickly realize it’ll take a little more than God to make this song work over Zoom. My parents are on the second verse while Mimi and her boyfriend are still reading the English. Uncle Dave has given up entirely while the Goldsteins beg everyone to wait, but are laughing so hard they knock over a wine glass. Soon enough everyone is laughing, singing whatever part of “Dayenu” they please, stomping their feet and banging on their respective tables. As my dad yells “Encore!” and starts one final chorus, trying to start a clap-along, everyone begins cheering and pouring more wine, commemorating what has to be our best rendition of “Dayenu” to date. We turn the Haggadah’s final page and wish everyone a happy meal. Right before we hang up, my uncle asks why we don’t do Passover this way every year. Because as tough a situation it may be, it sure was more than enough.

Postscript, June 5:  As I edited this piece, I was astounded by how much the world has changed since this Passover seder, and mournful for all those we have lost to the virus. The global events we all witnessed will change the way we see the world permanently. As I see the atrocities committed again Black Americans, specifically George Floyd, I keep thinking about the Passover call for freedom.  I’m fortunate that what I have is enough. But until we treat everybody equally, it will never be enough. 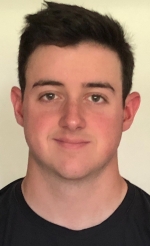 Kyle Mazer is an undergraduate student at Yale University pursuing an English degree in creative nonfiction. Outside of class, Kyle is a stand-up comedian, performing mainly in New Haven and his home state of New Jersey, as well as the director of The Good Show, his on-campus sketch comedy group. Kyle was also the creator and composer of a comedic musical So, Betsy!, a show about people writing a musical about Betsy Ross. In his remaining free time, Kyle is the host of a baseball-themed comedy podcast, “Crackin’ Peanuts.”