I moved to Valencia, on Spain’s eastern coast, over two years ago after a decade in Paris; I wanted the sun and the sea and to be surrounded by Spanish. But since the state of emergency – the lockdown was announced on March 13 – many days here have been overcast, even drizzly. The Mediterranean Ocean may be close, but I’m cut off from that, too. I live with a roommate from San Marino and am in lockdown with a partner I’ve never lived with before.

What better test than quarantine, right?

All of us neighbors come out to the balconies at 8 pm each night to clap for the healthcare workers – and I think for each other, too. I didn’t know the faces of anyone in the front building until this pandemic. Their blinds are usually drawn during the day, a custom that had puzzled me when I had arrived seeking the light.

But these days, everything is changing. I now recognize who resides behind those shutters with the Spanish flag. And I know the woman with the potted plants. A crayon drawing of a rainbow appeared in the window across the street. Despite the obvious clue that a child lived there, my breath still caught from their beauty when a young family first stepped into sight and began to applaud.

My block has a resident DJ, anonymous to me for the moment as they’re too far down to see. The evening applause is accompanied by music afterwards, and the selections have been remarkably varied. “Twist and Shout,” to which a woman in her bathrobe started dancing. She waved, specifically at me. Maybe because I was wearing a bathrobe, too. There’s been the soundtrack to Mamma Mia. A smattering of reggaeton. And a Valencian band called Seguridad Social. Social Security.

Last night, AC/DC’s “Highway to Hell” blasted through the air. My roommate Manu, who loves all things heavy said, “Even me, I think this isn’t the time.” But we burst into big smiles anyway.

Manu already knows someone who has died of coronavirus and others who are hospitalized. San Marino is a small place. One day he woke and suggested he find somewhere to shelter alone. “I don’t want my sadness to infect you.”

“Absolutely not,” I replied. “This is your home. We are all in this together.”

I teach English as a Foreign Language at a private university. Now I see my students online and get to peek inside their homes, too. Last week, we had a grammar unit on expressing desires and regrets. I wish, we hope, if only.

I played Nina Simone. In addition to the song’s title – “I Wish I Knew How It Would Feel To Be Free” – she names eight other dreams. I asked them to write the examples down as they heard them.

“I wish I could break all the chains holding me.”

“I wish I could say all the things that I should say.”

“I wish I could share all the love that’s in my heart.”

When I played it a second time so they could check their listening skills, I invited them to sing along. “You can turn off your mics, if you’re shy,” I said.  I don’t know if any participated in the silent karaoke – the lyrics were now displayed on screen instead of their faces. But I sang, and hoped some of them did, too.

“I wish we could leave our house,” said a student, when I asked them to write their own examples to embed the structure we’d just studied. It usually takes the personal to really learn.

“I wish I could see my boyfriend.”

“I wish we could find a cure for the coronavirus quickly.”

For me, I wish in this current danger, that we seize the opportunity. It’s ripe and glittering and there for the taking. A total reset. Shake whole societies. Shake hard and wake up.

Thinking of other people’s suffering has always made me physically hurt. Injustice makes me rage. I’ve had a streak of melancholic despair since I can remember but a massive well of joy and hope, too.

I wish we would embrace the lessons we’re witnessing and bearing, though it shouldn’t have taken pain to see it. That our worth as human beings should not be tied to our productivity or what we do for work. That our mistreatment of the environment is catastrophic and must not continue. That health care is a right. That we are valuable beyond measure and no bank account tells an accurate story. That no matter our differences, we are all interconnected. This virus can fell anyone. We are all in this together.

I told my partner about the drastic decrease in pollution across the globe. About Venice’s canals clearing, fish visible again.  Neither of these examples moved him, and it was another flash of how different we are.

Do our differences make for a dynamic relationship – or are they deal breakers? We’ve had a roller-coaster year parsing that question.

And then he touches me and says something to make me laugh. And for a moment I’m brought back to the present moment. Sitting here in the sun now, finally. The rays feel like medicine, yes. 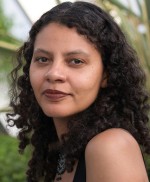 Sion Dayson is a writer, EFL teacher, and voice actor living in Valencia. Her debut novel, As a River (Jaded Ibis Press, 2019), is a Foreword INDIES Book Award Finalist. Her work has appeared in numerous venues including The Writer, The Rumpus, Electric Literature, Hunger Mountain, and Utne Reader. She holds an MFA from Vermont College of Fine Arts.