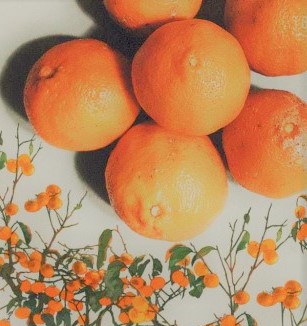 A few days ago, Abigail saw shadows sprouting everywhere. They slipped over the quarry walls. Some were dark, others translucent. They got tangled in the bougainvillea vines, crawled through the gardens, and curled up in the corners of the rooms, among the clothes hanging in the closets. They came and went through the corridors, oblivious to Abigail.

At first they frightened her, but soon she got used to living with them, although she always kept her distance. Thus passed a few years, and then one day while crossing a bridge, she saw, to her horror, a shadow stuck on a handrail, trying to break free. Unexpectedly, that figure, seemingly oblivious to the human world, observed the woman. Abigail felt dizzy when she exchanged a glance with those eyes that could only belong to the hatred of someone no longer alive.

The air blows
the subversive calm
around the house . . .

Memories reach me as mourners dressed in black arrive, along with a faint scent of orange blossom. I don’t know whether they’re here to give condolences or witness a tragedy out of curiosity.

What else do I have left? I cast my gaze over the black earth and an evocation passes like a worm over wet cloth.

I go back into an old memory. When I was as young as my sister, Freda, the townspeople invited us to madness in the midst of an Easter celebration. The locals stirred with tourists to form a living collage. Drumbeats pounded our ears. I wish I could linger forever in that memory, where we were still certain that we would be happy. But inevitably, memory falls apart inside my mind, and I can’t help remembering my sister, Clara. In the last years of her life, she was nothing but an empty shell of herself. Locked up in her room, she counted oranges on the tree outside her window. We could also count them when we went down to the dining room. Of course, it was better in Clara’s room because we could see not only the fruits, but also the street and passersby. Their fast steps gave us the feeling that they weren’t part of our reality.

The day Clara fell ill, a creature appeared. I suppose it was made from the same matter we’re all made of.

The priest keeps babbling. When your spirit is amputated, words of encouragement fail to reach your ears. When the words shatter, you find out how hollow they are. I don’t want to move. I remain on the grass and my feet begin to sink. I wish I didn’t have to go back to the house, which also belongs to my siblings and the creature. We all carry a piece of this ruin, without giving up the small space that was our inheritance.

The only one who tried the oranges was the creature. It knew how to tear them apart without squashing them in its hands. It didn’t need to reach for the fruits because they fell from the tree. Only the creature could drink the poisonous juice that unleashed deranged thoughts inside its head.

Clara listened as the creature’s footsteps approached. It remained at first in her room or in the TV room, but as time went by, the walls of our house crumbled, until it became a ruin. Nothing stopped the creature from invading Clara’s space.

One morning, Clara, even with her ears covered, could no longer stand the buzzing noise the creature made. With the strength she still had, she attempted to shut it up. Unbeknownst to my sister, however, the creature had grown to an inordinate size. It destroyed her without mercy. Freda wasn’t there. She’d take off for days on end without a care in the world.

When I arrived home at noon, Clara wasn’t looking out her window as she always did. Unfortunately, I didn’t have to look hard for her. In the hallway, the creature was licking the scarlet trail of blood leading to the service room.

How am I supposed to contain these bitter memories, like the creature’s breath?

My siblings and I look at each other and hesitate. The cemetery is about to close. We can’t move even though drizzle begins to wet our withered faces. Uncertainty keeps us nailed to the ground. The creature is no longer at home. It escaped through a crack in the façade of the house before it was captured. Its unbearable sound no longer pollutes the increasingly narrow walls. From the orange tree, fruits keep dropping and continue to sprout like tumors, forming a stinky rug on the earth. That’s the least of our worries. We’re concerned about how to keep away from Clara’s translucent ghost. Since yesterday, she’s been haunting us, apparently not knowing why we ignore her and why a pool of blood spreads across the room.